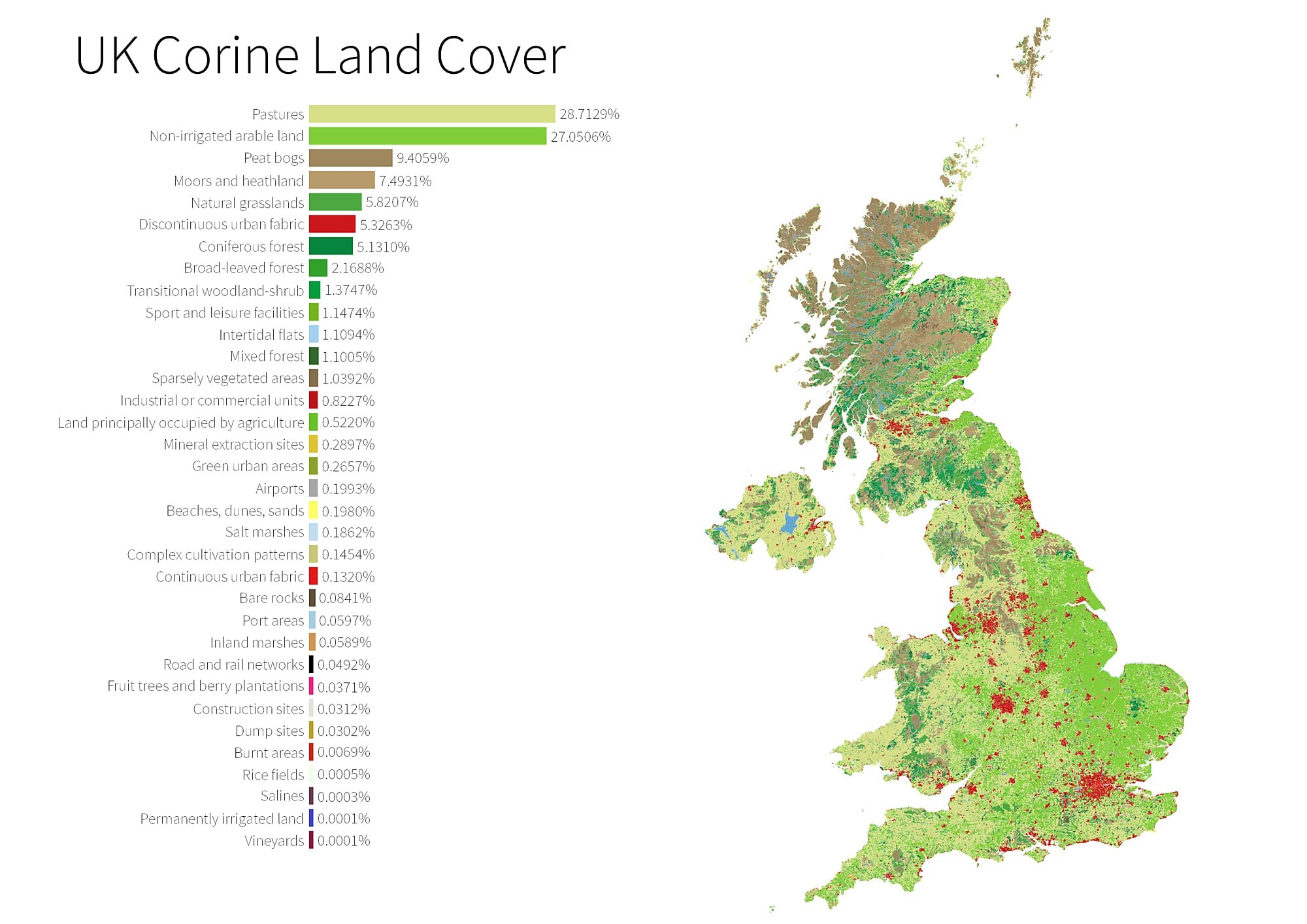 The UK is a green and pleasant land with more than half the country classed as pasture or arable land, according to a new set of maps created by an academic at the University of Sheffield.

The Land Cover Atlas of the United Kingdom, created by Professor Alasdair Rae from the University’s Department of Urban Studies and Planning, shows the variety and volume of different types of land uses across the UK.

The atlas reveals that agricultural land used for animal grazing and growing crops makes up approximately 56 per cent of the country. It also shows that peat bogs (nine per cent) make up more of the UK than urban areas (six per cent).

England is the most built on of the home nations at around nine per cent, while more than half of Wales and Northern Ireland are pastures and arable land. Land cover in Scotland, on the other hand, is dominated by a mixture of peat bog, moors and forest.

Professor Rae has also created individual land cover maps for each of the UK’s 391 local authority areas for the first time.

The maps were created with Corine Land Cover data from 2012 which includes 44 different types of land classification from ‘continuous urban fabric’, used to describe the most built up urban areas, to ‘vineyards’, ‘ricefields’ and ‘industrial and commercial units’.

They reveal that Moray in North East Scotland is covered by the most forest with 21 per cent. While Northern Ireland is home to the local authority with the most space for grazing as 85 per cent of Armagh, Banbridge and Craigavon is considered pasture.

The data has also been used by the BBC to create an interactive online tool to show how land is used in each council area. The 44 land classifications have been grouped into four broad categories:

The City of London is shown to be the most built up local authority in the UK with 98 per cent of the area built on.

The high number of golf courses and acres of royal parks in Richmond-Upon-Thames in South West London makes it the most urban green area at 41 per cent.

Professor Rae said: “It may feel like a very densely populated urban nation, but the reality is that the vast majority of the land area of the UK is not built on.

“Given that 83 per cent of the population of the UK lives in urban areas it is not surprising that some people hold the opposite to be true. However, from a land cover point of view, the United Kingdom is in fact dominated by pasture and arable land.

“At a local level things can be very different from the national picture, so it is important to know how land is being used as there are often competing needs. By knowing the makeup of the local landscape it is easier to make informed decisions about how land should be used and plan for the future.”

The complete set of maps and the Land Cover Atlas of the United Kingdom report can be viewed on Figshare.

Department of Urban Studies and Planning

There are a number of different land cover classifications in existence, but Corine is one of the most well-known and widely used, having been established in 1985 and providing comprehensive European coverage. ‘Corine’ is derived from ‘coordination of information on the environment’ and is a programme of the European Union.

This Atlas uses the most recent Corine data, from 2012, and is the first of its kind to map land use at the local authority level for every district of the UK.