• New system set to be created to automatically verify online rumours
• The lie detector will be the first of its kind to automatically analyse, in real time, whether a piece of information is true or false
• This will allow journalists, governments, emergency services, health agencies and the private sector to respond more effectively to claims on social media

In our digital age, rumours – both true and false - spread fast, often with far-reaching consequences. An international group of researchers, led by the University of Sheffield, is aiming to build a system that will automatically verify online rumours as they spread around the globe.

Social networks have been used to spread accusations of vote-rigging in Kenyan elections, allege that Barack Obama was Muslim and claim that the animals were set free from London Zoo during the 2011 riots. In all of these cases – and many more – an ability to quickly verify information and track its provenance would enable journalists, governments, emergency services, health agencies and the private sector to respond more effectively. 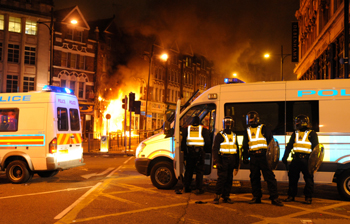 archer, Dr Kalina Bontcheva, from the Department of Computer Science in the University of Sheffield’s Faculty of Engineering explains: “There was a suggestion after the 2011 riots that social networks should have been shut down, to prevent the rioters using them to organise. But social networks also provide useful information – the problem is that it all happens so fast and we can’t quickly sort truth from lies. This makes it difficult to respond to rumours, for example, for the emergency services to quash a lie in order to keep a situation calm. Our system aims to help with that, by tracking and verifying information in real time.”

The EU-funded project aims to classify online rumours into four types: speculation – such as whether interest rates might rise; controversy – as over the MMR vaccine; misinformation, where something untrue is spread unwittingly; and disinformation, where it’s done with malicious intent.

The system will also automatically categorise sources to assess their authority, such as news outlets, individual journalists, experts, potential eye witnesses, members of the public or automated ‘bots’. It will also look for a history and background, to help spot where Twitter accounts have been created purely to spread false information.

It will search for sources that corroborate or deny the information, and plot how the conversations on social networks evolve, using all of this information to assess whether it is true or false. The results will be displayed to the user in a visual dashboard, to enable them to easily see whether a rumour is taking hold.

Dr Bontcheva adds: “We can already handle many of the challenges involved, such as the sheer volume of information in social networks, the speed at which it appears and the variety of forms, from tweets, to videos, pictures and blog posts. But it’s currently not possible to automatically analyse, in real time, whether a piece of information is true or false and this is what we’ve now set out to achieve.”

Throughout the project, the system will be evaluated in two real-world domains. For digital journalism, it will be tested by the online arm of the Swiss Broadcasting Corporation, swissinfo.ch. For healthcare, it will be tested by the Institute of Psychiatry at King’s College London, where they aim to look at new recreational drugs trending in online discussions and then find out how quickly these feature in patients' medical records and discussions with doctors.

The three-year project, called Pheme, is a collaboration between five universities – Sheffield, Warwick, King’s College London, Saarland in Germany and MODUL University Vienna in Austria – and four companies – ATOS in Spain, iHub in Kenya, Ontotext in Bulgaria and swissinfo.ch

1. The project is named after the Pheme of Greek mythology, who was said to have ‘pried into the affairs of mortals and gods, then repeated what she learned, starting off at first with just a dull whisper, but repeating it louder each time, until everyone knew’. She is described as the ‘personification of fame and notoriety, her favour being notability, her wrath being scandalous rumours’. http://en.wikipedia.org/wiki/Pheme

2. Following the riots, one of the project partners, Professor Rob Procter from the University of Warwick, worked with the LSE and the Guardian’s interactive team to manually analyse the spread of rumours on Twitter during the 2011 riots. This took several months – see http://www.theguardian.com/uk/interactive/2011/dec/07/london-riots-twitter.  The Pheme system will aim to do something similar, but automatically and immediately. To find out more about the project, please visit: http://www.pheme.eu, follow @PhemeEU on Twitter, or visit http://www.dcs.shef.ac.uk/~kalina

3. Also  at the University of Sheffield is Dr Farida Vis (Information School), a co-investigator on the original Reading the Riots project. Dr Vis is a leading social media scholar and has published widely in this area. She sits on the World Economic Forum’s Global Agenda Council on Social Media and in that capacity has written on the spread of false information online.

The Faculty of Engineering at the University of Sheffield - the 2011 Times Higher Education’s University of the Year - is one of the biggest and best engineering faculties in the UK. Its seven departments include over 4,000 of the brightest students and 900 staff, and have research-related income worth more than £50M per annum from government, industry and charity sources. Its research income recently overtook the University of Cambridge, confirming its status as one of the best institutions in the world to study engineering. The 2008 Research Assessment Exercise (RAE) confirmed that two thirds of the research carried out was either Internationally Excellent or Internationally Leading.

The Faculty’s expertise is extensive – its academic departments and two interdisciplinary programme areas cover all the engineering disciplines. They are leaders in their fields and outstanding contributors to the development of new knowledge, with world-leading academics linking their research to the teaching of the engineers of tomorrow.

The Faculty of Engineering is committed to ensuring students studying at Sheffield continue to benefit from world-class labs and teaching space through the provision of the University's new Engineering Graduate School. This brand new building, which will become the centre of the faculty´s postgraduate research and postgraduate teaching activities, will form the first stage in a 15 year plan to improve and extend the existing estate in a bid to provide students with the best possible facilities while improving their student experience.

To find out more about Engineering in Sheffield, visit: http://www.shef.ac.uk/faculty/engineering/