Life hots up for British birds

Climate change may be bad news for billions, but scientists at the University of Sheffield have discovered one unlikely winner – a tiny British bird, the long-tailed tit.

Like other small animals that live for only two or three years, these birds had until now been thought to die in large numbers during cold winters. But new research suggests that warm weather during spring instead holds the key to their survival.

The findings come from a 20-year study of long-tailed tits run by Professor Ben Hatchwell at the Department of Animal and Plant Sciences. The recent work is led by PhD student Philippa Gullett and Dr Karl Evans from Sheffield, in collaboration with Rob Robinson from the British Trust for Ornithology.

“During spring, birds must work their socks off to raise their chicks,” said Philippa Gullett. 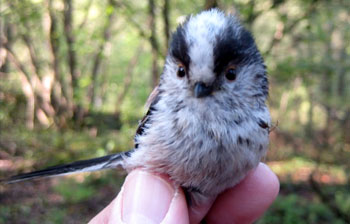 “For most small birds that live for only two or three years, not raising any chicks one year is a disaster. They might only get one more chance, so they can't afford to fail.”

No surprise then that these birds are willing to invest everything and risk death if it means their young survive. The surprise is that weather makes all the difference. The research discovered that birds trying to breed in warm and dry springs have much better chances of surviving to the next year – a novel result that counters common assumptions about the cause of death for small birds.

“What seems to be going on is that the tits try to raise their chicks at any cost,” added Ms Gullett.

“If it's cold and wet in spring, that makes their job much tougher. Food is harder to find; eggs and chicks are at risk of getting cold. The result is that by the end of the breeding season, the adult birds are exhausted.”

The study found no real effect of winter weather in recent years on adult survival, however cold and wet autumns were associated with a higher death rate.

“We're not saying that birds never die in winter - in harsh years there are bound to be some fatalities,” explained Dr Karl Evans.

“However, it seems that in most years autumn weather plays a bigger role, perhaps acting as a filter that weeds out weaker birds before the real winter hits.”

Although autumns may get wetter in the coming years, any increase in mortality is likely to be offset by the benefits of warmer breeding seasons, when more benign conditions reduce the costs of breeding.

Dr Evans added: “Looking ahead to the future, our data suggests that every single plausible climate change scenario will lead to a further increase in long-tailed survival rates. While many species struggle to adjust to climate change, these delightful birds seem likely to be winners.”

The research was funded by the Natural Environment Research Council (NERC).