Scientists identify why some fathers are left holding the baby

A century old mystery as to why, for some animals, it’s the father rather than the mother that takes care of their young has been cracked by researchers at the University of Sheffield. 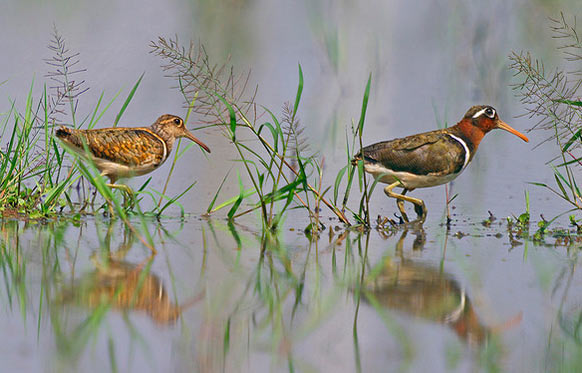 Experts from the University, in collaboration with the University of Bath and Veszprém (Hungary) found that role reversal was caused by an imbalance in the numbers of males relative to females.

The findings have been published in the journal Nature Communications.

Darwin noted in 1871 that in most animals, it is the females that spend most time looking after the young, whilst males focus on competing with each other for females.

Evolutionary biologists argued that this was due to the female investing significant amounts of energy in producing eggs, and in the case of mammals, giving birth, and so it is in their interests to ensure their offspring’s survival by caring for them.

However, in some species, such as seahorses, the sex roles are reversed where the females produce the eggs but then leave it to their male mates to care for their offspring.

Dr András Liker, Marie Curie Research Fellow from the University of Sheffield’s Department of Animal and Plant Sciences, said: “Sex-role reversal has been a formidable puzzle for evolutionary biologists ever since Darwin. Our study is the first supporting the idea that sex ratio plays an important part in the evolution of role reversal.”

The researchers studied birds where the sex roles were reversed and found there was a higher ratio of males to females in the population, compared with the usual situation where females care for offspring.

Professor Tamás Székely, Professor of Biodiversity at the University of Bath, explained: “The research group has investigated sex role reversal for over 20 years, and was extremely pleasing to see such a clear cut result.

“Mathematical models suggest that these animals’ behaviour is strongly influenced by their social environment, and our findings support these predictions.

“When there are lots of males in a population, it’s harder to find females, so it benefits males to stay with their mate and look after the young.

“However, the females often take advantage of this and leave the male holding the baby, whilst they go and find another mate.”

Females in the sex role reversed species also take on the traditional male role of being bigger and compete with each other for males.

The role reversal isn’t usually seen in mammals: since males can’t produce milk it’s not as easy for them to take over the parenting completely. However changes in sex role behaviour have been observed in humans when the sex ratio is imbalanced.