Lizzie the elephant: how an elephant captured the heart of a city

A herd of elephants is taking over the streets of Sheffield next week (11 July 2016), as part of the city’s biggest ever public art project raising funds for Sheffield Children’s Hospital. The University of Sheffield has adopted three of the colourful herd, which will be appearing at locations across its campus.

But it was another elephant which stomped Sheffield’s streets 100 years ago during the First World War which has provided the inspiration for this year’s stampede.

As part of the celebrations, Professor Vanessa Toulmin, Professor of Circus and Fairground at the University of Sheffield has revealed an insight into the life of Lizzie, an elephant that was one of the most important workers in Sheffield’s steel industry in 1916.

Acquired from a menagerie based at the Wicker Arches owned by William Sedgwick, Lizzie was leased to Thomas Ward, a Sheffield scrap dealer. 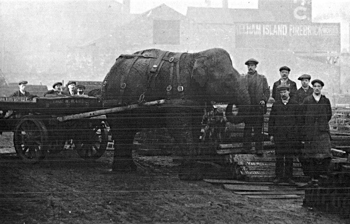 The scrap metal business owned by Ward was vital to Sheffield’s foundries and steel makers. At the outbreak of World War One, the company was feeding a thousand tons of scrap metal per day into the country’s steel industry, which was crucial to the nation’s war effort.

Lizzie was recruited by Ward to replace horses that were requisitioned by the military to serve in Europe during the war.

She transported machinery around the city and helped supply Sheffield’s foundries and steel makers with the materials they so desperately needed to power the country’s armed forces.

During her time in the city, Lizzie became a legend. She was loved by everyone and won a place in the heart of every resident in Sheffield.

She was often seen plodding through the city’s streets, up and down the city’s hills, venturing between factories to ensure Sheffield’s furnaces continued to roar before resting in her stable at what is now the Hancock & Lant building on Lady’s Bridge

“There are many anecdotes about Lizzie which show why she became one of the most-loved workers on the payroll of the city’s steel industry,” said Professor Toulmin.

“She walked the streets of Sheffield alongside everybody else in the city.

“Sheffielders would pass her on a daily basis and see the contribution she was making to their factories, industries, and ultimately the nation’s war effort.

“While working hard, she is said to have had a cheeky personality. Eating a schoolboy’s cap, putting her trunk through a kitchen window to help herself to a pie that was cooling, and pushing over a traction engine are some of the stories that swept the city and helped her become a celebrity in her own right.”

According to the World’s Fair Newspaper collection, which is housed in the University’s National Fairground Archive, an article in January 1931 shows how Lizzie was often called upon by the city’s residents in times of need.

“An article reporting on the death of William Sedgwick’s son, Richard in 1931, mentions that while Lizzie was working in South Yorkshire an engine got stuck in the snow and Lizzie was called to the rescue. She could pull a weight that would normally be shared out between three horses!” Professor Toulmin added.

So what happened to Lizzie after the First World War? Did she stay in Sheffield or did she return to her former job in the circus and menagerie industry?

Studies by Sheffield’s National Fairground Archive show there are conflicting and exaggerated stories on where Lizzie went at the end of the Great War.

Sheffielders would pass her on a daily basis and see the contribution she was making to their factories, industries, and ultimately the nation’s war effort.

Professor Toulmin explains, “Lizzie could do the work of three horses so it’s possible that she carried on working for Thomas Ward in Sheffield for a short duration after the war. There are also stories that she did carry on working until the cobble stone roads of Sheffield damaged her feet, which forced her to retire.

“Other stories suggest she returned to the circus or a menagerie. There are photographs of her or possibly another elephant working in tandem with circus camels.”

“Lizzie could have moved into service with one of the legendary Bostock and Wombwell circus tours, or possibly been purchased by a zoo.”

It isn’t clear what happened to Lizzie after the war, but what is certain is the impact she had on the city of Sheffield and how she captured the affections of people in the region.

The steel industry in Sheffield was central to the nation’s war effort and it was Lizzie who made sure the city’s foundries and furnaces had the supplies they needed. Without her, production may have been severely hampered.

Lizzie was also a symbol of how welcoming the city of Sheffield was and continues to be for people from all over the world. Today it’s a city of sanctuary, but studies show how this was also the case in the years surrounding the First World War.

History Matters, a blog from the University of Sheffield’s Department of History, reveals records of migration into Sheffield during the interwar period from South Asia, where Lizzie herself is said to have originated.

The blog describes how many migrants worked in the city’s steel mills, foundries and collieries, and lived in all parts of the city without conflict.

It goes on to describe how some scholars suggest conflict has been a major issue in the history of migration to Britain, but in Sheffield the successful migration and settlement of people within working class communities did occur in the years surrounding the First World War without social upheaval.

This tradition, which Lizzie signified, is still present in the city today with support and solidarity being shown by people across the region for refugees fleeing war and persecution. Sheffield’s universities, college, MPs and city leaders have also recently united to send out a strong message that the city welcomes students from all over the world.

In the centenary year since she wandered the streets of South Yorkshire, Lizzie is still remembered and is still helping the people of Sheffield. A Sheffield Community Transport bus has recently been named after her and now a new herd of elephants has appeared across the city to raise funds for patients in Sheffield Children’s Hospital.

To find out more about the Herd of Sheffield project, visit: http://www.herdofsheffield.com/

Sheffield is the only university to feature in The Sunday Times 100 Best Not-For-Profit Organisations to Work For 2016 and was voted number one university in the UK for Student Satisfaction by Times Higher Education in 2014. In the last decade it has won four Queen’s Anniversary Prizes in recognition of the outstanding contribution to the United Kingdom’s intellectual, economic, cultural and social life. Sheffield has five Nobel Prize winners among former staff and students and its alumni go on to hold positions of great responsibility and influence all over the world, making significant contributions in their chosen fields.