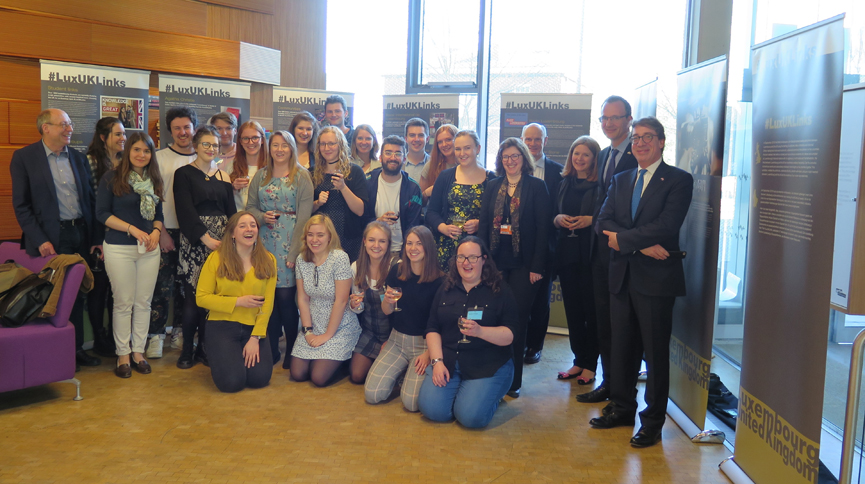 Students and staff from the University of Sheffield are celebrating their friendship with Luxembourg this month as part of an exhibition on the strong ties between the UK and the nation at the heart of Western Europe.

The exhibition, which was launched by John Marshall, the UK’s Ambassador to Luxembourg, highlights the historical, economic, cultural and community links between the two countries. It also showcases the momentous events and extraordinary individuals who have brought the two nations together over the centuries.

The exhibition tells how the UK is Luxembourg’s most important financial services partner in Europe and how The Beatles’ debut record, Love Me Do, was first heard on Radio Luxembourg – a jazz and light music radio station which became a firm favourite amongst British listeners from the early 1930s.

Displays at the exhibition also include:

Launched after a series of tweets by Ambassador John Marshall about the links between the two countries using the hashtag #LuxUKLinks, the exhibition has been touring schools, museums and communities across Luxembourg before travelling to the University of Sheffield.

Sheffield students are studying migration, French, German and Luxembourgish that are spoken in the country, and the history of Luxembourg throughout the First and Second World Wars.

Dr Kristine Horner, Director of the Centre for Luxembourg Studies at the University of Sheffield’s School of Languages and Cultures, said: “Our two nations share a deep, long-lasting friendship that many people may not be aware of. Over 6,000 British nationals currently live in Luxembourg and around 700 Luxembourgers live in the UK. Our two countries have worked together across film, music, finance, television, literature and even the steel industry in many collaborations that are still ongoing today.

“Luxembourg sits at the heart of Western Europe; Luxembourg City is one of three capitals of the European Union and the vast majority of people are multilingual, with many speaking French, German and Luxembourgish, so to understand Luxembourg is to understand a little about Europe itself.

The exhibition can be followed using the hashtag #LuxUKLinks on social media.

Find out more about the University of Sheffield’s international friendships and support for staff and students from all over the world using the hashtag #WeAreInternational on social media.

Study Luxembourg Studies at the University of Sheffield

Research in Luxembourg Studies at the University of Sheffield