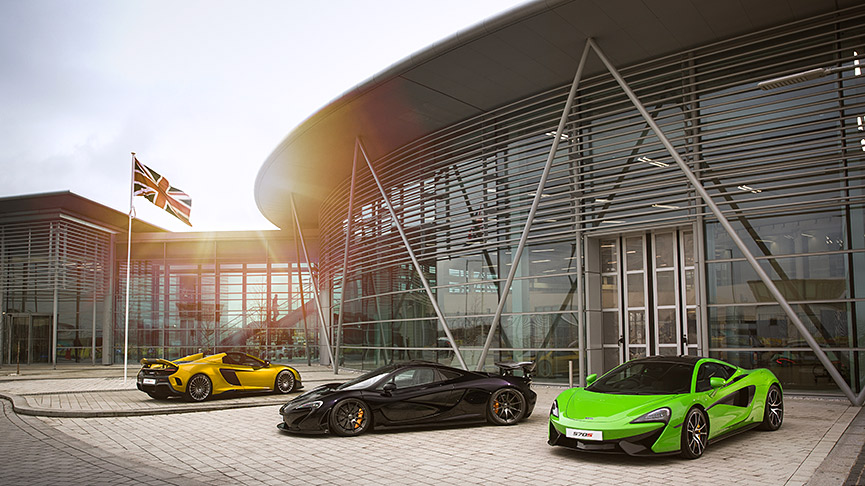 The high-performance supercar manufacturer has announced today (Thursday 9 February 2017) that it will open a new purpose-built Composites Technology Centre in the North of England’s Advanced Manufacturing Innovation District – a world-class centre of manufacturing excellence within the Sheffield City Region.

The announcement builds on the continued international success of the AMRC as an epicentre of regional and national economic impact, a source of life-changing apprenticeship opportunities for young people in industry and a large-scale innovation hub for some of the world’s most dynamic businesses.

This investment – and the innovation, jobs, training and opportunities it offers – is hugely significant for our region, the North of England and the UK’s global, industrial ambitions.

Developed with the support of Sheffield City Council, the Composites Technology Centre will be responsible for the development and manufacturing of advanced carbon fibre chassis for McLaren Automotive’s supercars. The partnership will create more than 200 jobs through a combined investment of nearly £50 million.

The Composites Technology Centre represents a significant reshoring of the manufacturing of car chassis to the North of England – a key objective of Northern Powerhouse and Industrial Strategy policies. Based in the UK’s first Advanced Manufacturing Innovation District, the site of the new centre offers world-class research, skills and partnerships.

McLaren Automotive and the University of Sheffield will deliver a two-year research and development programme, which will lead to the development of a production facility to build its lightweight carbon fibre chassis for its new models from 2020. The University of Sheffield’s AMRC Training Centre will also immediately start training McLaren apprentices who will work in the new facility. 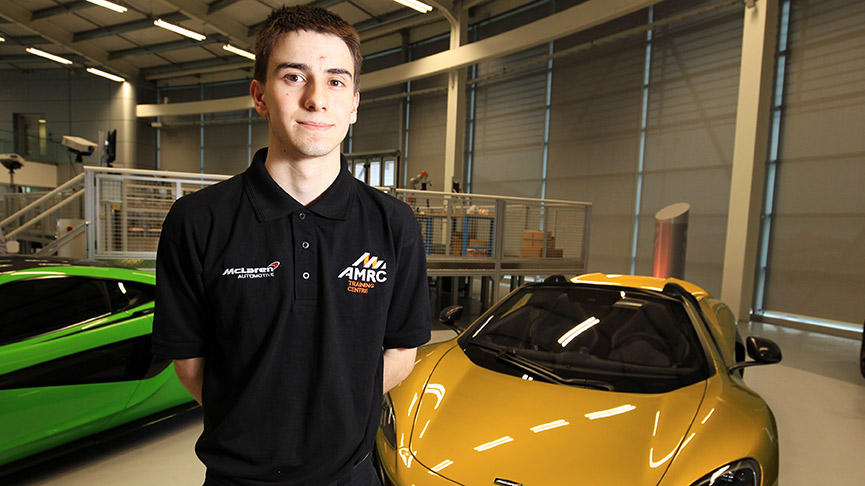 Professor Keith Ridgway, Executive Dean at the University of Sheffield’s AMRC, said: "This is a tremendous piece of news for the Sheffield City Region and a boost for its future as the UK’s centre for advanced manufacturing.

"In many respects it represents a new model that repositions manufacturing in Sheffield, taking it on from coal and steel to high performance components for the automotive, as well as the aerospace, sector.

"We will be working with McLaren Automotive on the construction of the carbon fibre chassis and further research, and we are talking with the supply chain. It is our ambition that supply chain companies will start to build factories here to supply the chassis plant."

The University’s ongoing investments in facilities and developing capabilities had been a catalyst to attract McLaren. These investments had further enabled the AMRC’s Composite Centre to push the boundaries of manufacturing capabilities across all market sectors.

President and Vice-Chancellor of the University of Sheffield, Professor Sir Keith Burnett, added: “This investment – and the innovation, jobs, training and opportunities it offers – is hugely significant for our region, the North of England and the UK’s global, industrial ambitions.

"What we’re offering is unrivalled access to world-leading research, development and established partnerships with industry. We also have an exceptional facility that offers degree apprenticeships - meaning we can train our region’s young people with the skills it needs to power the manufacturing workforce of the future."

The new McLaren Automotive facility is due to start construction in early 2017 with the first pre-production carbon fibre chassis, built using trial manufacturing processes in the AMRC, expected to be delivered to the McLaren Technology Centre in the second half of 2017. Full production at the facility will begin by 2020.

Mike Flewitt, Chief Executive Officer of McLaren Automotive, said: "In 1981, McLaren was the first company to recognise the exceptional properties of carbon fibre, and we have designed the highly-technical material to be at the heart of every McLaren road and racing car ever since.

"The now-iconic McLaren F1 was the world’s first road car to be built with a carbon fibre chassis and every car built more recently by McLaren Automotive has the same. Creating a facility where we can manufacture our own carbon fibre chassis structures is therefore a logical next step."

He added: "We evaluated several options to achieve this objective but the opportunity created by the AMRC at the University of Sheffield was compelling. At the AMRC, we will have access to some of the world’s finest composites and materials research capabilities, and I look forward to building a world-class facility and talented team at the new McLaren Composites Technology Centre."

The new centre hopes to deliver cost savings of around £10million and £100 million of GVA (gross value added) benefit to the local economy by 2028. Opportunities for expansion thereafter could create an ambition of doubling that to £200 million. The in-sourcing of the manufacture of the carbon fibre chassis also increases the average percentage (by value) of a McLaren car sourced in the UK by around eight per cent from its average of around 50 per cent, depending on model.

FT on Air: How is McLaren Automotive revving up production?

Peter Campbell at the Financial Times hosts a Facebook Live event where the University’s role as a magnet for investment is discussed.

"This is a tremendous deal for Sheffield, its people and workforce, and its growing research and development sector.

"It is further proof that the Advanced Manufacturing Innovation District is the place for leading manufacturers to come not only for research and development and industrial collaboration, but also for production.

"This combination of value-adding R&D investment and related production employment is the key to our future economic success.

"We offer something unique here in Sheffield and Rotherham – a cutting-edge manufacturing base that links our two universities and leading businesses to create jobs and investment across the Sheffield City Region.

"Our team has led the charge to create a place that draws in and develops world-class people and a place where the world's leading companies come to explore new technologies and operating methods and deliver research and technology into the UK's supply and value chains.”

She added: "McLaren joins other global names developing the next generation of advanced engineering and manufacturing technologies and products at the park. These businesses are choosing to come to a borough that has a history and future of engineering excellence.

"As we look to the future of manufacturing and the next stage of our economy, the Advanced Manufacturing Park project is the standard to which other parts of the country aspire." 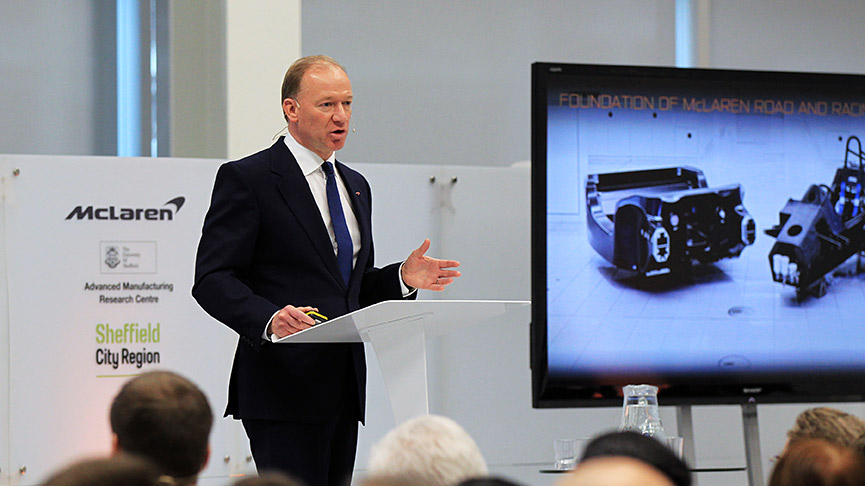 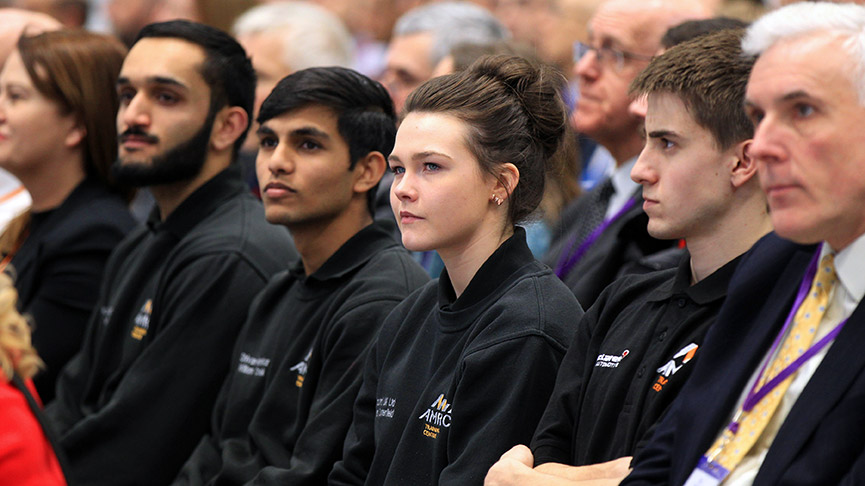 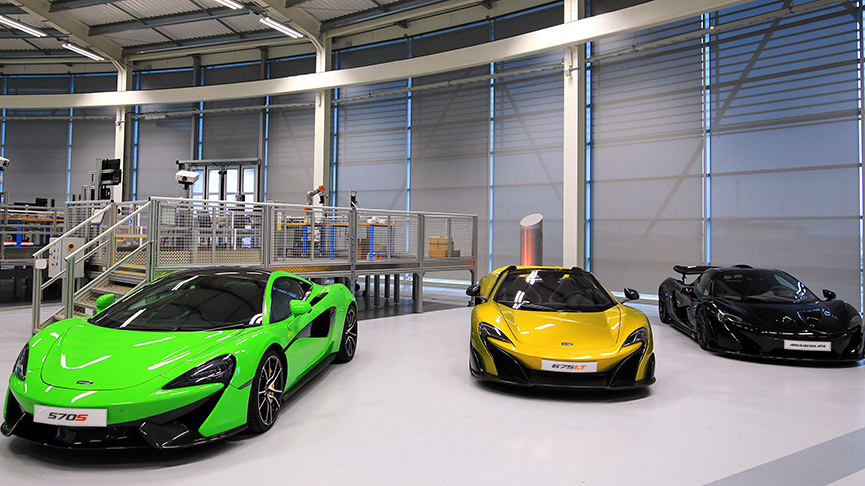 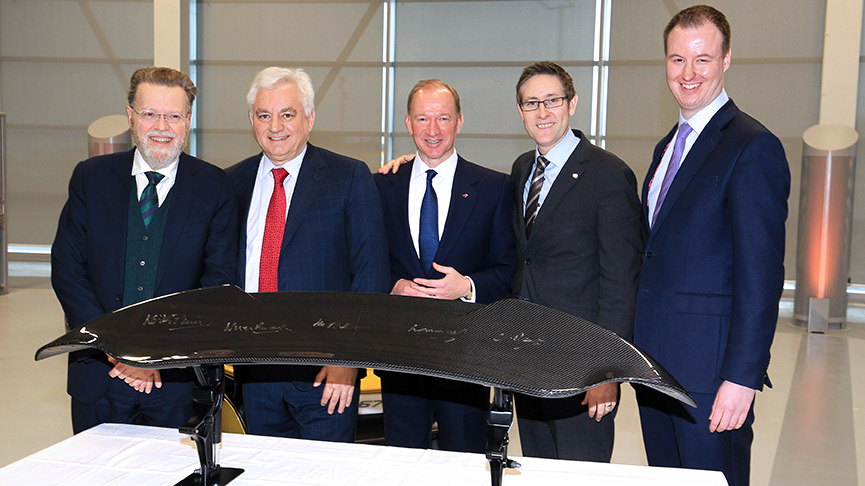 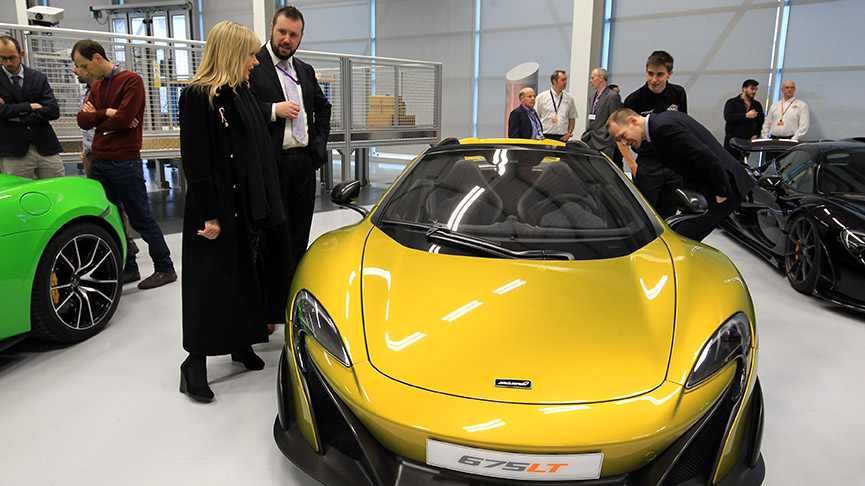 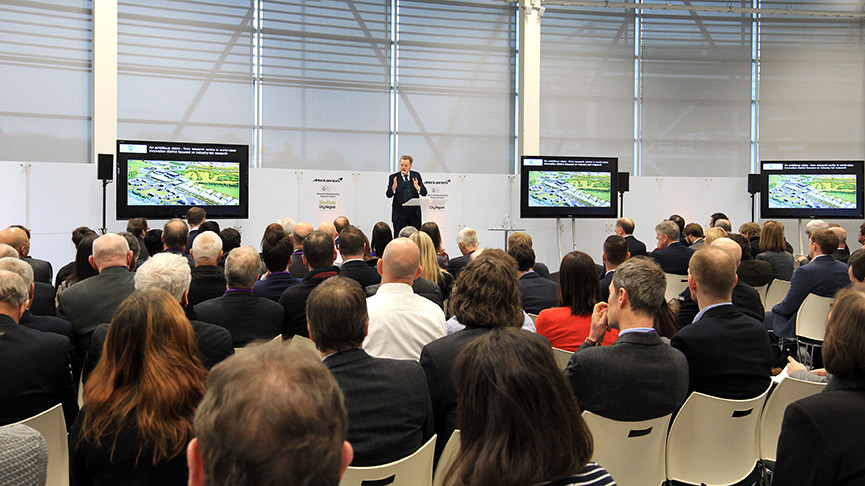 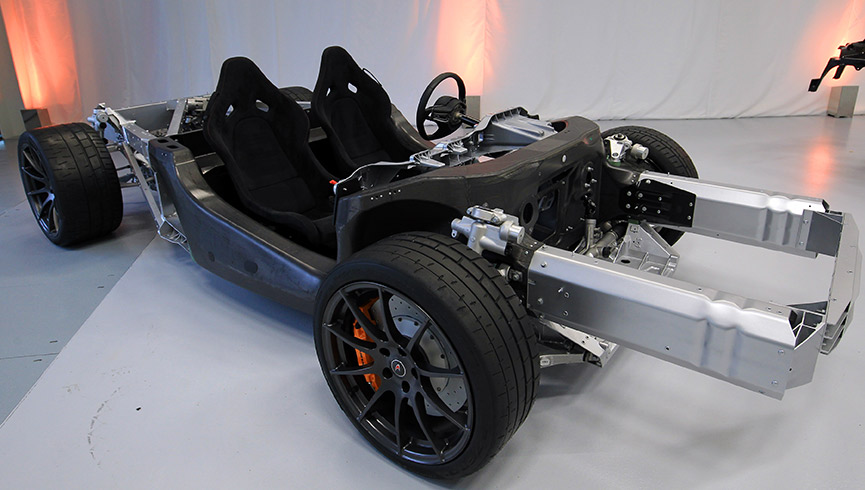 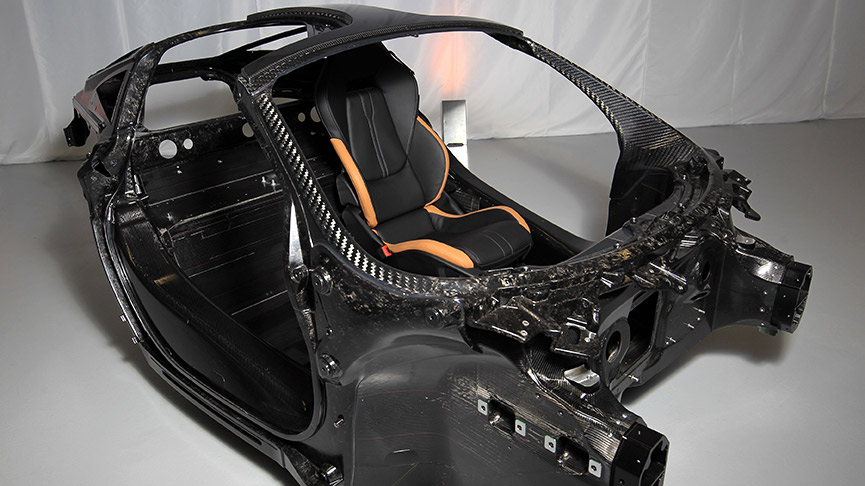 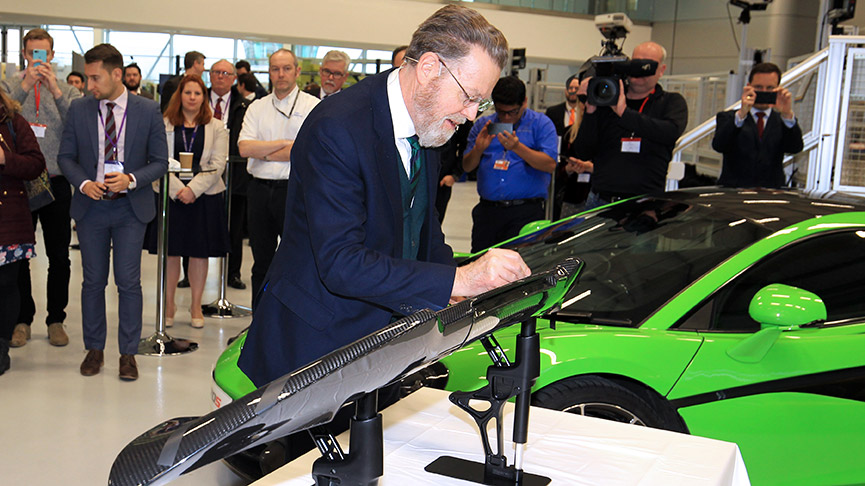 The AMRC and the McLaren Composites Technology Centre

The AMRC was established in 2001 as a £15 million collaboration between the University of Sheffield and aerospace giant Boeing with the purpose of using Sheffield’s traditional expertise in materials and machining, and applying those skills for future technological development.

In 2015, the AMRCs Factory 2050 was opened as the UK’s first fully reconfigurable assembly and component manufacturing facility for collaborative research, capable of rapidly switching between different high-value components and one-off parts. The 7,000 sq m building is home to the AMRC’s Integrated Manufacturing Group with open-plan desk space integrated with high-tech assembly and manufacturing – much like the existing McLaren Production Centre in Woking, Surrey. The new McLaren Composites Technology Centre will be sited near to the AMRC campus.

The McLaren Composites Technology Centre will be housed in a 7,000m² building set over four acres and will be responsible for the research and development of future Monocell and Monocage carbon fibre chassis as well as the manufacturing of the chassis itself. The 200 new employees will comprise approximately 150 production staff and 50 manufacturing support staff.

For more than 30 years, McLaren has pioneered the use of carbon fibre in vehicle production. The McLaren MP4/1 was the first car on the Formula One™ grid to feature a carbon fibre chassis. Compared to the aluminium structures of the time, carbon fibre was lighter but stronger and therefore faster but safer. By the following season, most competitors had adopted this new material in the construction of their cars, and it continues as the prevalent construction material today. And on the road, the now-iconic McLaren F1 from 1993 was the first road car ever to be built with a carbon fibre chassis. This car still holds the world record for the fastest naturally-aspired road car.

Since 1981, McLaren has not built a car without a carbon fibre chassis.