A solar energy project at the University of Sheffield which is celebrating its second anniversary has shown almost all of the 2,000 systems in the scheme are “doing what they say on the tin”.

Researchers running Sheffield Solar Farm, which was launched in August 2010, say 98 per cent of more than 2,000 systems involved in the scheme are working to their specifications across the UK.

Hundreds of homeowners and commercial organisations across the country have been uploading their energy generation figures to the project’s specially created website for two years, giving experts an unrivalled insight into the performance of the different types of systems available.

Dr Alastair Buckley, a lecturer from the University’s Department Physics and Astronomy, was surprised to find so many of the photovoltaic systems – which turn light energy into electricity – were so successful.

He said: “There are basically three main technology types that have been deployed in the UK, and they are all working well - that is ’to spec’. They do what they say on the tin most of the time.

“About two per cent of systems we have data for are clearly under-performing, all the rest fall within a broad distribution with the obvious factors such as local climate and roof orientation controlling the energy yield.

“We would have expected more systems to be under-performing - but it seems that the UK weather, with its lack of direct sunshine, actually makes installations less sensitive to orientation than might be expected.” 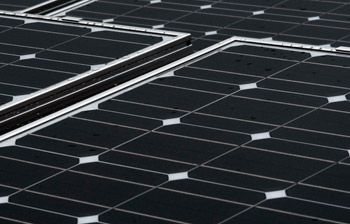 The project, which hopes to help the UK lead the way in photovoltaic research and boost our knowledge of renewable energy, has attracted over £420,000 of funding from the energy industry and research councils and will continue until at least 2015.

Dr Buckley and his team believe the future of solar energy in the UK lies either on the nation’s roof tops or in its fields.

“Roof tops offer no conflict in terms of land use but are harder to install and maintain,” added Dr Buckley. Solar farms provide a potential higher level of performance as optimum locations can be chosen and systems are easier to maintain at ground level but they potentially displace land that could have been used for farming or recreation.”

He continued: “Costs are continuing to fall and most people now agree that solar energy is important for the future. As system costs continue to fall more and more people will be able to get a system. I think there will be a number of break points in the future, when typical systems can be installed at prices that more and more people can afford. It’s not just the return on investment that’s important for solar, but the actual price of the system.”

Aldous Everard, also of the University’s Department of Physics and Astronomy, and who also runs the Sheffield Solar Farm, added: “With the rising price of our utilities and concerns over climate change, people are having to become more interested in their energy usage and its production. The roll out of the solar photovoltaic industry has meant that the public are able to become energy producers as well as consumers. This means they can reduce the country's emissions from energy generation.

“We need to get information to these new energy generators so they can find out if what they are doing is working and how to best manage the systems they have. As a country we need to know what the actual production is from these systems. Databases like ours will help the public get more knowledge, as well as the Government and industry, so we can establish what can really be achieved through this technology.”

To sign up to the project people with their own solar panels can visit www.microgen-database.org.uk.