A pioneering study by the University of Sheffield has provided new evidence on which African habitat types declining breeds of migrating birds spend the winter in when away from their European breeding sites. 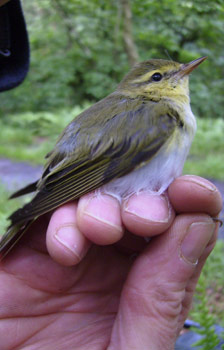 The research has solved a number of mysteries that have intrigued ornithologists for decades and it is hoped it could be used to help save shrinking populations of three declining African-Eurasian birds: wood warblers, house martins and common swifts.

The threatened species are suffering across much of Europe - for example British wood warblers have declined by about 70 per cent since 1995.

The study used state-of-the-art machinery for detailed chemical analysis of feathers grown in Africa, but collected across Europe and the Middle East, to identify the key habitats birds forage during the winter. This technique identifies the key habitat types that must be protected to help prevent further population declines.

Dr Karl Evans, Conservation Biology Lecturer in the University’s Department of Animal and Plant Sciences, led the study. He said: “Before this study we didn't previously know which habitat types the species used in winter in Africa, especially for house martins and wood warblers. It was previously thought that house martins spent the winter foraging over tropical rainforest and would be threatened by deforestation. This study proves that that is incorrect and they use a wider range of habitat types, with some birds using more grassy areas.

“Perhaps the most important, but worrying, finding is that wood warblers from across Europe all use the same very specialised habitat type on their African wintering grounds; moist forest. Wood warblers are likely to be very vulnerable to loss of this habitat type.

"This is important information because wood warbler populations are declining rapidly across much of their European range.

"Swifts use an even wider range of habitat types so are unlikely to be adversely influenced by habitat changes in Africa.”

Dr Evans added: “Using the stable isotope approach enables data to be generated without needing to visit Africa; it is relatively cheap and avoids potential biases that may be generated by the difficulty of accessing certain regions or habitats.

“The focal species are declining and could be influenced by habitat loss on African wintering grounds. Our findings demonstrate how stable isotope research can contribute to understanding avian migrants’ winter ecology and conservation status.”