University of Sheffield graduates from around the world are set to return to Sheffield this weekend (25 March 2018) as part of a concert that honours one of classical music’s most inspiring musicians. 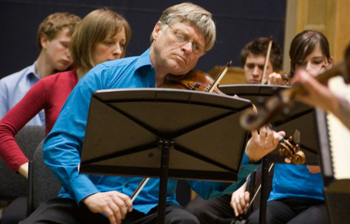 The concert, which celebrates the life and music of Peter Cropper, the founder and former leader of the internationally renowned Lindsay Quartet, features performances by musicians who studied in the University of Sheffield’s Department of Music over the past 50 years.

Graduates from the University who are performing in the concert work with prestigious orchestras and music institutions all over the world. Some of the alumni joining the concert are returning from countries such as Cyprus and Japan.

Other music graduates include alumni who have developed successful careers in Sheffield and throughout the UK, such as composers from Platform 4 – a Sheffield-based composers collective – and a musician from the Royal Air Force.

Peter Cropper, once dubbed by a journalist as the Mick Jagger of the string quartet because of the intensity and commitment of his playing, also founded Music in the Round – the largest promoter of chamber music outside of London, which presents two concert series each year and an annual May Festival in Sheffield.

Professor George Nicholson from the University of Sheffield’s Department of Music, who is conducting the orchestra in the concert, said: “In 2015 classical music lost one of its most imaginative and inspirational musicians in Peter Cropper. He will be remembered for his enormous contribution to chamber music, and of course, for founding and leading the Lindsay Quartet. The quartet was internationally renowned but it has also been widely regarded as the heart and soul of chamber music in the north of England, and it was certainly crucial in the development of a faithful and discerning audience for chamber music in Sheffield and the surrounding region.”

He added: “We’re delighted to be welcoming musicians who have studied at the University of Sheffield throughout the past 50 years, and they will be playing alongside a few of our current students and young musicians from the Sheffield Music Academy. Our music graduates have gone on to work with some of the UK’s leading orchestras and in some of our most prestigious music institutions. We have former students returning to us from various countries across the world, which bears testimony to the recognised quality of a music degree from the University and its value to people who are interested in pursuing a career in the music industries.

“I am also delighted that Peter Cropper's son Martin will be leading the orchestra during the weekend, and bringing along with him several up-and-coming local string players currently working with him at the Sheffield Music Academy. This will be a real cross-generational event, a collaboration between musicians from the University's past and present and some of the young people of Sheffield who will carry the Cropper spirit of music-making forward into the future.”

The University of Sheffield’s Department of Music is a leading centre for research and inspirational teaching in music. It is in the top 10 for research excellence in music, according to the latest Research Excellence Framework, and the University is in the top five universities in the UK for best overall student experience in the Times Higher Education Student Experience Survey 2018.

The Peter Cropper Alumni Orchestra and Choir concert is being held on Sunday 25 March 2018 at Firth Hall, University of Sheffield from 3pm. Tickets and information.