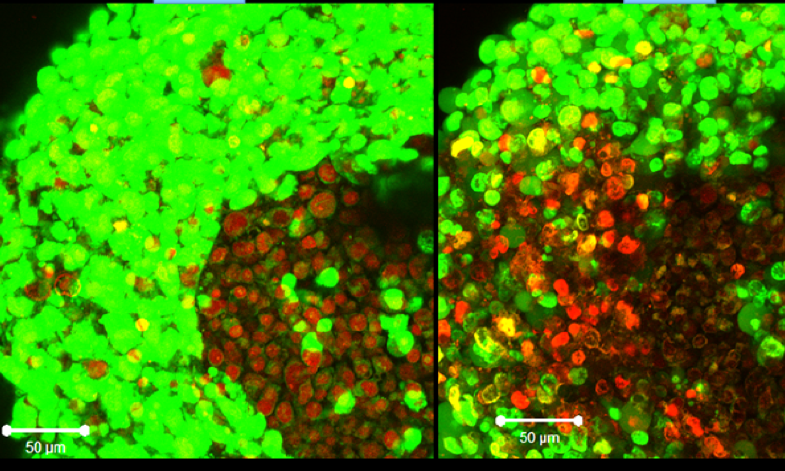 Researchers at the University of Sheffield have synthesized a new compound which could improve the success rate of photodynamic therapy when treating cancer.

The key to photodynamic therapy (PDT) is a compound known as a sensitizer, a light-sensitive medicine given to the patient, which when activated by light produces highly reactive oxygen-based species which kill the cancer cells. However, current PDT treatment has two main drawbacks when it comes to killing tumours.

First, currently used sensitizers are only activated by light energies that do not penetrate tissues, like skin, very deeply. Second, many tumours have low amounts of oxygen, so photoactivated sensitizers cannot generate the toxic compounds which kill cancer cells.

Now scientists at the University of Sheffield have developed a new compound which solves both of these problems in one go. Not only is the new compound activated by infrared or red light which can penetrate deep into the tumour, but it also directly damages DNA within cells without having to rely on oxygen.

Researchers at the University of Sheffield have tested the compound in skin cancer tumour models and observed that it killed cancer cells deep into these model tumours. The next step in the research will look at skin models, testing whether the compound can kill the tumour but leave healthy skin undamaged.

Professor Jim Thomas, from the University of Sheffield’s Department of Chemistry, who led the study said: “PDT is potentially a very attractive way to treat diseases such as skin cancer as it only works when the laser light is applied, so the effect can be focused into a specific place on or in the body.

“The sensitizer we have developed can potentially solve the two main problems that prevent PDT from being a commonly used anticancer treatment.”

The research, published in the Journal of the American Chemical Society, was carried out by scientists from the University of Sheffield’s Departments of Chemistry and Materials Science and Engineering and the Science and Technology Facilities Council (STFC) Central Laser Facility.