Agricultural decisions made by our ancestors more than 10,000 years ago could hold the key to food security in the future, according to new research by the University of Sheffield. 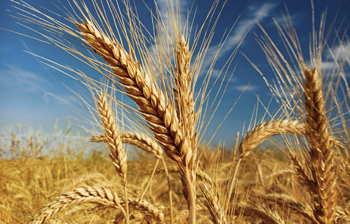 Scientists, looking at why the first arable farmers chose to domesticate some cereal crops and not others, studied those that originated in the Fertile Crescent, an arc of land in western Asia from the Mediterranean Sea to the Persian Gulf.

They grew wild versions of what are now staple foods like wheat and barley along with other grasses from the region to identify the traits that make some plants suitable for agriculture, including how much edible seed the grasses produced and their architecture.

Dr Catherine Preece, who worked on the study with colleagues from the University’s Department of Animal and Plant Sciences and Department of Archaeology, said: “Our results surprised us because numerous other grasses that our ancestors ate, but we do not, can produce just as much seed as wild wheat and barley. It is only when these plants are grown at high densities, similar to what we would find in fields, that the advantage of wild wheat and barley is revealed.”

The study identified two key characteristics shared by the wild relatives of current crop plants. Firstly they have bigger seeds, which means they grow into bigger seedlings and are able to get more than their fair share of light and nutrients, and secondly, as adult plants they are less bushy than other grasses and package their big seeds onto fewer stems. This means crop wild relatives perform better than the other wild grasses that they are competing with and are better at growing close together in fields, making them ideal for using in agriculture.

“The results are important because our expanding human population is putting increasing demands on food production,” said Dr Preece.

“Before humans learnt how to farm, our ancestors ate a much wider variety of grasses. If we can understand what traits have made some grasses into good crops then we can look for those characteristics in other plants and perhaps identify good candidates for future domestication.”

She added: “To shape the future we must understand the past, so the more we can discover about the origins of agriculture, the more information we will have to help us tackle the challenges that face modern day food production.”

So far the researchers have been conducting their experiments in greenhouses and their results indicate that the traits affecting how plants compete with each other are crucial factors to determining the success of a crop.

The team now plan to observe how the plants interact in their natural environment by growing them in experimental fields in Turkey, the heart of the Fertile Crescent. They hope that their experiments will yield another crop of important results.

“Cereal breeders are taking an increasing interest in modern crops' wild relatives as a source of useful traits that may help to increase yields or increase resilience to climate change, and our work should help in this process,” said Dr Preece.

The joint meeting of the British Ecological Society (BES) and the Société Française d’Ecologie (SFE) is being held from Tuesday 9 to Friday 12 December at the Grand Palais, Lille. Further information can be found on the Annual Meeting app available here http://eventmobi.com/bessfe/

The British Ecological Society was established in 1913 making it the oldest ecological learned society in the world. The BES promotes the study of ecology through publishing a range of scientific literature, organising and sponsoring a wide variety of meetings and funding grant schemes, education initiatives and policy work. The society has almost 5,000 members from 80 different countries.

The Société Française d’Ecologie is a non-profit organisation, established in 1968, which represents over 400 practicing ecologists and evolutionary biologists throughout France. The SFE’s activities include promoting ecological and evolutionary research, organisation and sponsorship of meetings, funding of grant schemes and facilitating communication between the research community, the general public and policy makers.