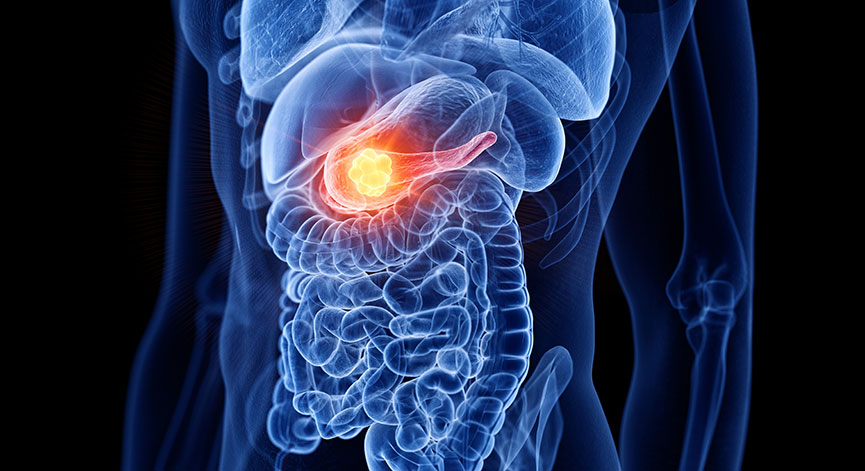 A new drug which could improve life expectancy and quality for patients with hard-to-treat cancers, such as pancreatic cancer and relapsed breast cancer, has been invented by scientists at the University of Sheffield.

The researchers founded the spin-out company Modulus Oncology, along with a team of experienced biotech entrepreneurs, to fast-track the drug into clinical testing within two years.

The Sheffield team made the discovery after examining a hormone, called adrenomedullin, which controls blood pressure and other vital body processes, but also stimulates the growth and spread of cancer.

Using novel drug molecules, known as adrenomedullin-2 receptor antagonists, the scientists discovered a way to block the way that adrenomedullin is used in communication with cancer cells, without affecting the way it helps to regulate vital processes in the body such as blood pressure.

Findings of the pioneering study, published in the journal ACS Pharmacology & Translational Science, show the new drug molecules have a positive effect in the treatment of pancreatic cancer in mouse models.

Pancreatic cancer has the lowest survival rate of all common cancers, with only seven per cent of patients surviving five-years after diagnosis.

Professor Tim Skerry from the University of Sheffield’s Department of Oncology and Metabolism and a team of academic and industrial scientists from a range of scientific disciplines have been working on the groundbreaking research for the past 12 years.

“The most extraordinary part of this new therapy is the fact that nature designed the hormone adrenomedullin to have two different types of receptor - one which helps to regulate our blood pressure and the other which is involved in the way that cancer cells communicate with each other and the host cells, helping cancers to grow and spread,” said Professor Skerry.

“We have designed a unique piece to fit into nature's jigsaw which will block signals from one receptor but allow the other to work as normal. In blocking the hormone’s communication with the cancer cells we are cutting off its supply to the things that it needs to thrive. This means tumours can’t grow as fast as they are starved of the resources they need and it becomes more difficult for them to spread to other areas of the body.

We have designed a unique piece to fit into nature's jigsaw which will block signals from one receptor but allow the other to work as normal. In blocking the hormone’s communication with the cancer cells we are cutting off its supply to the things that it needs to thrive.

He added: “Pancreatic cancer tumours are notoriously aggressive and difficult to treat and their location makes it easy for the cancer to spread to nearby organs such as the liver and stomach. The nature of pancreatic cancers means it is hard to get current drugs into the tumour. We believe adrenomedullin-2 receptors offer advantages for pancreatic cancer patients.

“Over the past 30 years the diagnosis and treatment of the vast majority of cancers has evolved rapidly, helping more people survive the disease than ever before. However, advances in treating pancreatic cancer and improving patient outcomes have had little effect on life expectancy. There are still cancers that are resistant to treatment and research is needed to solve those problems.”

The novel drug molecules were found to be effective in treating pancreatic cancer tumours in mice models. Tumours did not grow as fast which provides evidence to suggest life expectancy would be extended. The compound is different from traditional therapies such as cytotoxic drugs and radiotherapy because it targets a very small number of cells and does not damage healthy cells in the body. It is hoped this will improve quality of life for patients undergoing treatment.

It is thought the concept will also be beneficial in other traditional hard-to-treat cancers such as relapsed breast cancer and lung cancer.

Building on more than a decade of research, and with substantial grant funding from The Wellcome Trust, the scientists created the spin-out company Modulus Oncology along with a team of biotech entrepreneurs.

Key members of the Modulus Oncology team include Professor Skerry and four of the company's co-founders: Dr Alan Wise, Chief Executive Officer; Dr Clare Wareing, Chief Business Officer; Dr Gareth Richards, a key discovery scientist on the programme who will assume the role of VP of Preclinical Biology; and Professor Joe Harrity, also a key member of the discovery team who will assume a role on the Scientific Advisory Board.

Dr Alan Wise, CEO of Modulus Oncology, said: “The team at the University of Sheffield have performed some truly pioneering research here and I am delighted to be helping Modulus Oncology take this vital work towards clinical testing. Our goal is to demonstrate benefit for cancer patients as well as growing a successful UK biotech company.”

Modulus Oncology is currently in discussions with a number of life science investors to raise funding for first-in-human clinical trials designed to generate strong clinical proof of concept data.

The University of Sheffield
With almost 29,000 of the brightest students from over 140 countries, learning alongside over 1,200 of the best academics from across the globe, the University of Sheffield is one of the world’s leading universities. A member of the UK’s prestigious Russell Group of leading research-led institutions, Sheffield offers world-class teaching and research excellence across a wide range of disciplines. Unified by the power of discovery and understanding, staff and students at the university are committed to finding new ways to transform the world we live in. Sheffield is the only university to feature in The Sunday Times 100 Best Not-For-Profit Organisations to Work For 2018 and for the last eight years has been ranked in the top five UK universities for Student Satisfaction by Times Higher Education. Sheffield has six Nobel Prize winners among former staff and students and its alumni go on to hold positions of great responsibility and influence all over the world, making significant contributions in their chosen fields. Global research partners and clients include Boeing, Rolls-Royce, Unilever, AstraZeneca, Glaxo SmithKline, Siemens and Airbus, as well as many UK and overseas government agencies and charitable foundations.