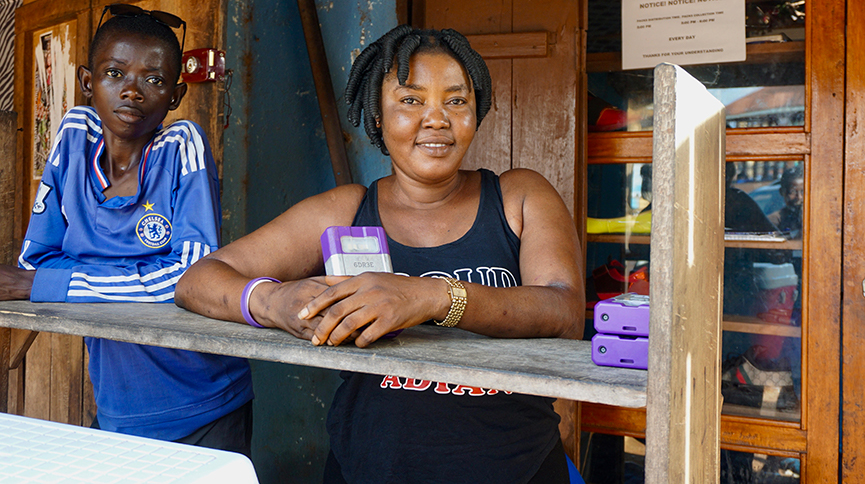 Researchers from the University of Sheffield are delivering affordable, clean energy to remote communities in Sierra Leone as part of a pioneering new project.

The collaboration, led by Mobile Power Ltd in partnership with Professor Dan Gladwin from the University’s Energy Institute and Department of Electronic and Electrical Engineering, has already developed pay-per-charge smart battery packs to address the lack of grid electricity in the country.

The pay-as-you-go smart battery rental system, developed by Mobile Power, supplies affordable, clean energy to poor households and enterprises in off-grid communities. The batteries are charged at solar charging stations before being delivered to customers, thereby removing the need for dangerous traditional petrol generators and reducing energy costs by up to 75 per cent.

A second project will now work with Professor Dan Gladwin and other battery storage experts from the University to develop significantly larger lithium-ion battery packs that can store energy as part of a mini-grid and will be ‘hot swappable’ – meaning they can be rented out for household, transport and commercial use, such as to run fridges for medicines in hospitals, then returned back to the micro-grid to be recharged.

In Sub-Saharan Africa, population growth outstrips electrification, even while people increasingly rely on electrical equipment for communication and commerce. This lack of energy stifles economic growth and limits living standards and opportunities.

A study by Mobile Power in 2016/17 showed that 20 percent of household income in Sierra Leone is spent on lighting and mobile phone charging. Most of these lighting costs are spent on disposable batteries, which creates an environmental issue, and mobile phones are charged at ‘telecentres’ in towns, powered by polluting and dangerous petrol generators.

Professor Dan Gladwin, Professor in Electrical and Control System Engineering at the University of Sheffield, said: “These new battery packs can be swapped in or out of the micro-grid without shutting down the power system and are designed to maximise the life of the battery cells under different applications. They can one day be providing power to a whole village and the next day be swapped out to drive the motor of an electric KeKes (auto rickshaw). For households where the cost of connection to the mini-grid is prohibitively high, these packs are easily carried to the home and are capable of powering multiple devices for long durations.”

The partnership between Mobile Power and the University will enable research into pack design and its docking/charging system to optimise charging speeds, cycle life of the battery packs and the management of the hot-swappable system.

Jono West, Founder and Chair at Mobile Power and Project Lead, said: “We are grateful for the partnership with Professor Dan Gladwin, particularly in his support and advice to date. We look forward to working closer together on this project.”

At Winch Energy’s mini-grid in Sierra Leone, women will be employed as energy entrepreneurs, renting out the batteries for household and micro-enterprise use. At Pink Power’s site in Freetown, a trial will take place to power electric tuk-tuk’s with the battery packs. This will be part of Pink Power’s wider project on training vulnerable women to drive the tuk-tuks as a form of employment.

Jono West said: “Two of the greatest challenges facing the world in meeting the UN’s Sustainable Development Goals for Agenda 2030 are universal energy access and gender equality and women’s empowerment. This Innovate UK Energy Catalyst project looks to find a way to allow these goals to mutually support one another, by empowering women entrepreneurs in the delivery of energy services in hard to reach communities through Mobile Power’s battery technology.”

The University of Sheffield’s Department of Electronic and Electrical Engineering has built a reputation for being a world leader in electromagnetics, semiconductors and communications.

Researchers in the department are experts in all aspects of electronic and electrical engineering. Their expertise has helped them develop long lasting partnerships with world leaders in industry and academia as well as form nationally and internationally recognised research centres based at the University.

Teaching in the department is informed by its world leading research which helps engineering students at the University learn by a combination of theory and hands-on practical lab sessions in its state-of-the-art facilities with courses accredited by the Institute of Engineering and Technology (IET).

Professor Gladwin is part of the University of Sheffield Energy Institute, which is finding low-carbon solutions to some of the world’s biggest energy challenges.

The Energy Institute carries out energy research across a wide spectrum of fields, including renewable, nuclear and conventional energy generation, energy storage, energy use and carbon capture, utilisation and storage technology. Its multi- and interdisciplinary research teams work with industry and government on sustainable solutions.

The Energy Institute at the University of Sheffield

Electronic and Electrical Engineering at the University of Sheffield