The First Minister of Scotland Nicola Sturgeon is in the Sheffield City Region today (Monday 7 November 2016), where she will visit the University of Sheffield’s Advanced Manufacturing Research Centre (AMRC) ahead of a major speech addressing the state of the economy following the EU referendum result. 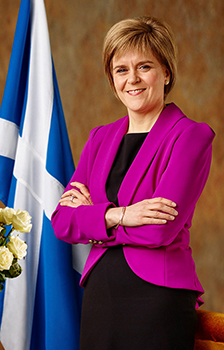 Ms Sturgeon will meet apprentices at the AMRC and learn how the University is working with businesses to plug the UK skills gap and increase productivity in the advanced manufacturing sector. She will also tour Factory 2050, the world’s first fully-reconfigurable, digital factory for collaborative research, and find out how smart factories operating cyber-physical systems will help to deliver the fourth industrial revolution: Industry 4.0.

The Scottish Government plans to create a National Manufacturing Institute for Scotland to shape the future of manufacturing and innovation in Scotland.

The First Minister will then go on to address a sold-out audience of 1,200 at the Sheffield Political Economy Research Institute (SPERI), part of the University of Sheffield, on “Scotland and the UK: economic policy after the EU referendum”.

Setting out the need to learn the lessons of the EU referendum result and to invest in inclusive growth, Ms Sturgeon will say: “We need to demonstrate that being open to free trade and free movement isn’t just good for the economy as a whole. It benefits individuals and communities too. It creates, rather than curtails new opportunities for everyone. And it can lead to a society which is more prosperous, more inclusive, and more cohesive.”

SPERI brings together leading international researchers, policy-makers, journalists and opinion formers to develop new ways of thinking about the economic and political challenges by the current combination of financial crisis, shifting economic power and environmental threat. SPERI’s goal is to shape and lead the debate on how to build a new political economy.

Professor Tony Payne, Co-Director of SPERI, said: “Nicola Sturgeon is without doubt one of the UK’s most high-profile and influential politicians. Over the coming years the First Minister will play a crucial role in forging a new relationship between Scotland, the UK and Europe, and addressing some of the major political and economic questions arising from this. We are delighted to welcome her to Sheffield to give our annual lecture.”

You can watch the SPERI annual lecture below.

The ESRC Festival of Social Science

The 14th annual Festival of Social Science takes place from 5-12 November 2016 with more than 250 free events nationwide. Run by the Economic and Social Research Council, the Festival provides an opportunity for anyone to meet with some of the country’s leading social scientists and discover, discuss and debate the role that research plays in everyday life. With a whole range of creative and engaging events there’s something for everyone including businesses, charities, schools and government agencies. View the full programme on the Festival of Social Science website. You can also join the discussion on Twitter using #esrcfestival.