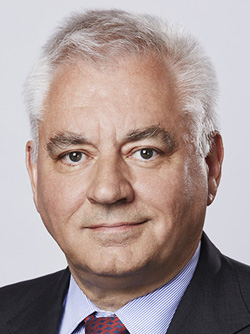 The Co-Chairman of law firm DLA Piper, who graduated from the University’s School of Law in 1977, was announced in the key leadership role today (5 November 2015).

Sir Nigel replaces James Newman, the former Master Cutler and current chairman of Finance Yorkshire, who was involved in securing a historic £900 million devolution deal for the Sheffield City Region.

LEPs are the government's model to promote economic development and provide the strategic leadership required to set out local economic priorities, and better reflect the natural economic geography of the areas they serve.

When searching for a new Chair, the LEP said it was looking to appoint someone who "understands the region and its potential, and will be a great champion for the LEP and our many sectors and companies”.

Sir Nigel, who will take on the new role from the end of the year, said: “Sheffield City Region has positioned itself at the heart of the Northern Powerhouse over the last few years, winning deal after deal with government and working in partnership to deliver growth and jobs in the local economy.

“When the opportunity to play a leading part in the future of Sheffield City Region came about, I realised that this was a chance to make a difference to an area that has played a huge part in my life and to the development of DLA Piper.”

He added: “I believe that the LEP has a clear vision, a strategy for achieving it and a team of people truly committed to achieving its goals. I hope that my skills and experience, in transforming a Yorkshire law firm into a global business, can be used to drive forward these goals and economic ambitions.

“As Chair of Sheffield City Region LEP I look forward to furthering relations with colleagues at Whitehall, and at LEPs in Leeds, Manchester and across the north to build a better connected and prosperous Northern Powerhouse.”

Sir Nigel received a knighthood in 2009 for services to the legal profession and became an honorary Doctor of Laws at the University of Sheffield in July 2011. He is also a Visiting Professor in the University’s School of Law.

He was the driving force behind DLA Piper’s growth from its UK regional origins to a global business. It is one of the world’s largest law firms, with 4,000 lawyers in more than 30 countries throughout the Americas, Asia Pacific, Europe and the Middle East.

"The University is a key player in the city region in many ways, as a major employer and source of investment, as a provider of able graduates and life-enhancing research and through our globally leading work with companies on advanced manufacturing and innovation. It will be essential that we work closely with our Local Enterprise Partnership to help make the city region all it can be, and we are sure that he will bring to bear his experience of business but also of building economic strength and opportunity by looking outwards to partnerships internationally. We wish Sir Nigel every success in his new role!"