The Nobel Prize in Chemistry has today (5 October 2016) been awarded to a former University of Sheffield lecturer. 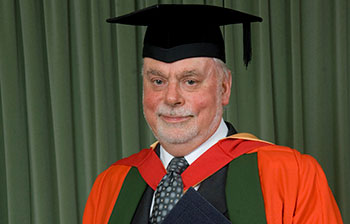 The Royal Swedish Academy of Sciences presented the accolade to Professor Sir Fraser Stoddart who joined the University of Sheffield in 1970 where he was the first Imperial Chemical Industries (ICI) Research Fellow before going on to become a lecturer and then Associate Professor of Chemistry.

The work conducted by Sir Fraser and his Sheffield research group in 1991 was cited and praised in the Nobel Prize announcement for enabling the field of molecular machinery to take a ‘big leap forward’.

Mike Ward, Head of the Department of Chemistry and Professor of Inorganic Chemistry at the University of Sheffield, said: “On a personal note, Professor Stoddart was the external examiner for my PhD thesis back in 1989 and I also went on to do Post-Doctoral research with another of the winners, Professor Jean-Pierre Sauvage, in Strasbourg during the 1990’s.

“I am delighted, not just that my PhD examiner and postdoc supervisor has been honoured in this way, but that the area in which I grew up as an academic has been given such recognition.”

He added: “It is wonderful to see Professor Stoddart's work in supramolecular chemistry honoured in this way. He, along with the other two winners, popularised the field of molecular topology in which molecules can be mechanically interlinked without a chemical bond between them; or can be folded up into elaborate structures such as complex knots.”

The machines conceived by the laureates could slip inside the human body to deliver drugs from within - for instance, applying pharmaceuticals directly to cancer cells.

Professor Nigel Clarke, Pro-Vice Chancellor of the Faculty of Science at the University of Sheffield, said: “I was delighted to learn that Professor Sir Fraser Stoddart is one of this year's Nobel Prize winners in Chemistry. He spent 20 years working in our chemistry department during which time he laid the foundations for his pioneering work on rotaxanes.”

Sir Fraser was born in Edinburgh in 1942. During his career he has received a number of prestigious national and international honours including the Royal Medal in 2010 from His Royal Highness the Duke of Edinburgh, the Albert Einstein World Award of Science and the Royal Society of Chemistry’s Century Prize.

He was also awarded an Honorary Doctorate of Science from the University of Sheffield in 2008.

He has published 1,080 scientific papers, trained more than 500 graduate and postdoctoral students, and in 2007 the Sunday Times wrote that Sir Fraser ‘is to nanotechnology what J.K Rowling is to children’s literature’.

Sir Fraser is now Board of Trustees and Professor of Chemistry at Northwestern University in Chicago.

Professor Sir Keith Burnett, Vice-Chancellor of the University of Sheffield, said: "My warmest congratulations to Sir Fraser Stoddart on the wonderful news that his work has been recognised by the Nobel committee in this way. His exceptional contribution to Science is a source of great pride to us here in Sheffield, and we are delighted that this honour has been awarded to a former member of staff and recipient of an honorary degree.”

The University of Sheffield has six Nobel Prize winners