The University of Sheffield has cemented its long-standing commitment to supporting economic growth in the north by becoming a Northern Powerhouse partner during a visit by Northern Powerhouse Minister Jake Berry to its Advanced Manufacturing Research Centre (AMRC) today (Monday 12 February 2018). 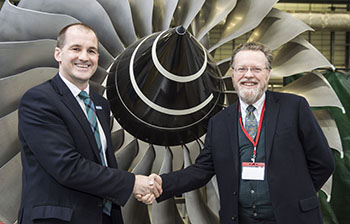 The University - which has 29,000 students and 7,000 staff - joins a wide-ranging group of northern organisations that have pledged to join forces with the Government to help the north achieve its full potential and attract new jobs and investment to the region.

The Northern Powerhouse Partnership agreement was signed as Mr Berry visited the University of Sheffield’s AMRC, which carries out world-leading research into advanced machining, manufacturing and materials and has more than 100 industrial partners, ranging from global giants like Boeing, Rolls-Royce, BAE Systems and Airbus to small companies.

The University’s AMRC works with its partners to help improve productivity, de-risk investment decisions, and accelerate the early adoption of Industry 4.0 technologies to improve performance and quality. It is a place where digital meets manufacturing, with world-class expertise in augmented and virtual reality, robotics and automation; intelligent machining; digital twins; data analytics and more.

The AMRC Training Centre has seen the University pioneer first class engineering apprenticeships in the UK, including degree apprenticeships. This has opened access to graduate qualifications to students who, in the past, may never have thought to pursue a university education. More than 1,000 young people, employed by 250 small and medium sized companies across the Sheffield City Region, have been trained at the centre, and a sister organisation is now planned at Doncaster Sheffield Airport.

Mr Berry, a University of Sheffield alumnus, was taken on a tour of the AMRC’s Factory of the Future, Factory 2050 and its Training Centre during his visit.

Professor Sir Keith Burnett, President and Vice-Chancellor of the University of Sheffield, said: "If the north of England is to create the strong economy which will be needed to create wealth and opportunities, it needs to work in new ways to be globally competitive.

From Shanghai to London, everywhere I go people are talking about the AMRC, I just had to come.

"As the cradle of the first industrial revolution, the north of England sent new products to the world. Now we need the infrastructure, research, innovation and skills which will enable us to lead in the era of Industry 4.0. This means new approaches to bringing together world-class research and teaching with global companies and their supply chains, creating new products and reshoring production. This is an area where the University of Sheffield is leading the way, working with Boeing, McLaren, Siemens and Rolls-Royce to make the Northern Powerhouse a reality."

Northern Powerhouse Minister, Jake Berry, said: “I was delighted to visit my alma mater, the University of Sheffield, including its state-of-the-art AMRC Training Centre which is helping to train the next generation of engineers and manufacturers in the Northern Powerhouse.

“The University of Sheffield is at the forefront of higher education in the UK and joins a number of British universities commanding high positions in global rankings – they contribute enormously to the international standing of the Northern Powerhouse and its reputation as a world-leader in research and academic excellence.”

As part of his tour, Mr Berry learnt how a team at the AMRC is working with Yorkshire Water on the use of virtual reality within the design and prototyping phase of new pumping stations. The technology will enable Yorkshire Water - and other water companies - to significantly reduce the time and the cost of producing new facilities. It will also help improve technical training and health and safety.

Professor Keith Ridgway, Executive Dean of the AMRC, said: “It’s been a pleasure to show the Minister just how integral we are to future of the Northern Powerhouse. Our research and innovation assets, coupled with a strong skills and talent base, are making the Sheffield City Region the go-to place for global manufacturing companies like Rolls Royce, Boeing and McLaren. All three have chosen sites alongside the AMRC to build their own factories of the future. This is transforming the Sheffield City Region into the Advanced Manufacturing Innovation District of the North: the place in the UK where digital meets manufacturing.”

He added: “The AMRC model is now being rolled out in the North West of England and in North Wales. We are opening an AMRC North West near Preston and we will be operating the £40 million Advanced Manufacturing Research Institute on Deeside, supporting the ‘wing of tomorrow’ project for Airbus. We also are helping to shape the destiny of the £60 million National Manufacturing Institute for Scotland, an industry-led international centre of manufacturing excellence near Glasgow.

“If you join the dots between these centres of excellence you have a powerful story of manufacturing renaissance in the North driven by research and innovation assets linked to universities.”

About the University of Sheffield’s AMRC

The University of Sheffield Advanced Manufacturing Research Centre (AMRC) is a world-class centre for research into advanced manufacturing technologies used in the aerospace, automotive, medical and other high-value manufacturing sectors.

Combining state of the art technologies with the AMRC’s expertise in design and prototyping, machining, casting, welding, additive manufacturing, composites and structural testing, has created a manufacturing resource far beyond anything previously available in the UK.

The AMRC is a member of the High Value Manufacturing Catapult, a consortium of leading manufacturing and process research centres, backed by the UK’s innovation agency, Innovate UK.