A novel therapy, pioneered by researchers from University of Sheffield, is helping to transform the lives of children with a life-threatening hormone deficiency.

Alkindi® is the first replacement therapy for infants, children and adolescents with paediatric adrenal insufficiency - the most common form being the genetic condition congenital adrenal hyperplasia (CAH) - which is caused by a lack of the stress hormone cortisol.

Children with CAH must take daily hydrocortisone replacements from birth, however until now there has been no approved paediatric product to administer the life-saving treatment and parents currently have to crush adult tablets, making it very difficult to control the dosage level.

Alkindi®, which has been developed by the University of Sheffield spin-out company Diurnal, was granted market authorisation by the European Medicine Agency and is now available to patients in the UK. 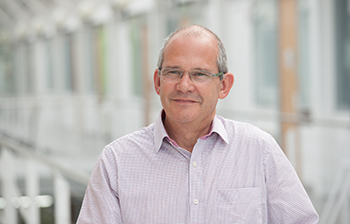 Richard Ross, Professor of Endocrinology at the University of Sheffield and Chief Scientific Officer of Diurnal, said: “Cortisol is an essential stress hormone, and without it, if you have a stressful event, such as an infection or a trauma you will die from an adrenal crisis.

“Administering adult tablets to babies and young children is a real challenge for parents who have to crush the tablets and then suspend them in water.

“It is incredibly hard to get an accurate dose which can lead to children having too little steroid, which causes an adrenal crisis, or too much steroid, which causes a number of long term problems including thin bones, thin skin and hypertension.”
Alkindi® was specially designed using a technology called multi-particulates - which are small cellulose beads coated with hydrocortisone before being covered in a taste-masking layer which hides the bitter taste of hydrocortisone.

Using multi-particulates means doctors can provide the accurate small doses required for neonates that can then be increased as the child grows.

“A normal adult tablet of hydrocortisone is 10 milligrams, but Alkindi® makes it possible to administer doses as low as 0.5 milligrams for neonates,” said Professor Ross.

He added: “Parents can take the capsule filled with the granules and sprinkle it on food such as yoghurt or apple sauce. This not only makes it much easier for the children to take, but it also takes a lot of the stress out of it for the parents.
“It sounds like a very simple idea, but the challenge was to get low doses into a presentation which can be easily administered to children.”

Paediatric adrenal insufficiency (including CAH) is a rare disorder which affects approximately 4,000 sufferers under the age of six.

New born babies are screened for CAH shortly after birth in a number of countries around the world including the US and Germany. However, in the UK babies are not screened routinely and CAH is usually diagnosed after an adrenal crisis which causes a baby’s blood pressure to drop dramatically leading to a collapse of the circulatory system.

Sue Elford, Chairwoman of the Living with CAH support group, said Alkindi® is going to make a real difference to parents.

“My son was diagnosed with CAH at two weeks old. It was so scary desperately trying to crush up the steroid tablets and measuring the right amount. I was constantly worrying if he’d had too much or too little,” she said.
“Trying to break the tablets into halves and then quarters, three times a day, was so difficult and when the tablets crumbled I was so concerned I was going to waste them. The pressure and responsibility put on parents to get the dose right is enormous.”

Sue added: “Although Alex is now 30 years-old, I remember quite vividly the day I first heard the words ‘congenital adrenal hyperplasia’ and the devastation I felt when told this was an incurable condition.

“Alkindi® is going to make such a difference to parents who are now in the same position, hearing that their child will face a lifetime of daily medication.

“This new therapy will ensure that the dosage of each tablet is specific for individuals and dramatically reduce the long-term effects of too much steroid.”

Alkindi® was developed in collaboration with Diurnal through a €4.2 million Framework 7 research grant from the European Commission.

Clinical trials in neonates, infants and children aged up to six years have shown Alkindi® is safe, effective and well tolerated with children, with parents preferring Alkindi® to their current treatment.

Study at the Department of Oncology and Metabolism