Technologies that will enable nuclear waste to be sealed 5km below the Earth’s surface could provide a safer, cheaper and more viable alternative for disposing of the UK’s high level nuclear waste. 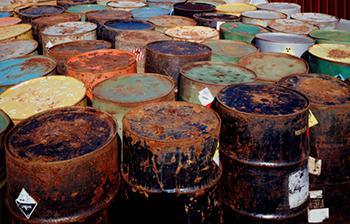 Scientists at the University of Sheffield calculate that all of the UK’s high level nuclear waste from spent fuel reprocessing could be disposed of in just six boreholes 5km deep, fitting within a site no larger than a football pitch.

The concept – called deep borehole disposal – has been developed primarily in the UK but is likely to see its first field trials in the USA next year. If the trials are successful, the USA hopes to dispose of its ‘hottest’ and most radioactive waste – left over from plutonium production and currently stored at Hanford in Washington State – in a deep borehole.

University of Sheffield researchers are presenting the latest findings relating to these trials and new concepts for sealing the waste into the boreholes at the American Nuclear Society (ANS) conference in Charleston this week (April 13-16 2015).

Professor Fergus Gibb, of the University of Sheffield’s Faculty of Engineering, explained: "Deep borehole disposal is particularly suitable for high level nuclear waste, such as spent fuel, where high levels of radioactivity and heat make other alternatives very difficult. Much of the drilling expertise and equipment to create the boreholes already exists in the oil and gas and geothermal industries. A demonstration borehole – such as is planned in the US – is what is now needed to move this technology forward."

At the ANS conference, Professor Gibb, with co-researcher Dr Karl Travis, will be presenting modelling work carried out by the University of Sheffield team on the Hanford waste, which confirms that around 40 per cent of the waste, in terms of radioactivity, currently stored at the US site could be disposed of in a single borehole.

Fundamental to the success of deep borehole disposal is the ability to seal the hole completely to prevent radionuclides getting back up to the surface. Professor Gibb has designed a method to do this which he will be presenting at the conference next week: to melt a layer of granite over the waste, which will re-solidify to have the same properties as natural rock.

Professor Gibb’s colleague at the University of Sheffield, Dr Nick Collier, will propose a method of fixing and surrounding the waste within the borehole using specialist cements able to handle the temperatures and pressures at that depth.

Deep borehole disposal (DBD) has a number of advantages over the current solution envisaged for all UK nuclear waste, which is in a mined repository at 500m depth: DBD is effectively ‘pay-as-you-go’ disposal. A mined repository can cost from hundreds of millions to tens of billions of dollars to construct before any waste can be disposed of; DBD costs a few tens of millions of dollars per borehole.

There are more geological sites suitable for DBD as the granite layer that is required can be found at appropriate depths under most of the continental crust.

• A borehole could be drilled, filled and sealed in less than five years, compared to the current timescale for a UK mined repository, which is to open in 2040 and take its first waste by 2075 (although a site has not yet been agreed).
• As DBD disposes of nuclear waste at greater depths and with greater safety and because there are more potential sites available, it should be easier to obtain public and political acceptance of the technology.
• DBD has limited environmental impact and does not require a huge site: the holes are a maximum 0.6m in diameter and can be positioned just a few tens of metres apart. Once a borehole is complete, all physical infrastructure on the surface can be removed.
• While seismic activity might damage the containers within the borehole, fracture the surrounding rock and disrupt some of the nearest barriers in the borehole, it would still not destroy the isolation of the waste or make it possible for radioactivity to reach the surface or any ground water.

The demonstration borehole in the USA will be drilled just under half a metre in diameter and trials will be conducted to ensure waste packages can be inserted into the borehole and recovered if required. Initial results are expected in 2016. If these results are positive, disposal of the Hanford waste capsules would then take place in another borehole, just 0.22m in diameter.

The Faculty of Engineering at the University of Sheffield is one of the biggest in the UK. With seven departments and two interdisciplinary programmes covering all the engineering disciplines, 4,300 students, 950 staff and £50M annual research-related income from government, industry and charity, it is one of the best institutions in the world to study or do research in engineering.

The Faculty has a long tradition of working with industry including Rolls-Royce, Network Rail and Siemens. Its industrial successes are exemplified by the award-winning Advanced Manufacturing Research Centre (AMRC), the £25 million Nuclear Advanced Manufacturing Research Centre (NAMRC) and – jointly with Boeing – the new £43M Factory 2050, the UK’s first fully reconfigurable digital factory.

To find out more visit: Engineering in Sheffield