Academics and members of industry from across the radiation field came together in Sheffield for a Radioactive Waste Symposium last week to discuss methods of dealing with the UK’s Radioactive waste. 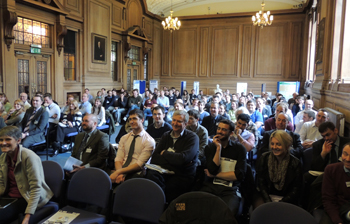 The event, held at the University of Sheffield, welcomed academics from universities across the country as well as members of staff from the National Nuclear Laboratory, Magnox, Sellafield Ltd and the Atomic Weapons Establishment.

The conference centred on discussing and developing new ideas for the storage of nuclear waste and the possible corrosion of current storage methods. The symposium included brief presentations on topics such as the corrosion of current stainless steel storage containers, possible alternatives to GDF (Geological Disposal Facility) such as Deep Bore Holes and understanding the behaviour of plutonium in radioactive wastes.

The event comes at a crucial time for the nation, with Cumbria County Council - where the majority of Britain’s nuclear waste is currently dealt with - recently delaying their decision as to whether or not they want to participate in developing the programme for geological disposal of radioactive waste.

Geoff Randall, the lead engineer for the sludge centre of expertise at Sellafield Ltd, said that the current nuclear waste problem is "extremely difficult" and will take a long time to solve. The main concerns of the Cumbrian Council were this difficulty, the lack of knowledge surrounding geological disposal facilities and the possible effect this may have on the environment.

Mark Gibson, also from Sellafield Ltd, raised concerns that "the longer it takes the GDF to be commissioned, the longer the waste containers have to sit in interim above ground storage where the containers are at risk of corrosion," highlighting the importance of a conference encouraging collaboration on nuclear waste which can open up channels between the industry and academia.

It is a possibility the conference may become an annual or by-annual event, increasing the collaboration between different departments within the nuclear industry. There are hopes this will make some progress towards solving the issues surrounding nuclear waste, providing a safe and clean storage method