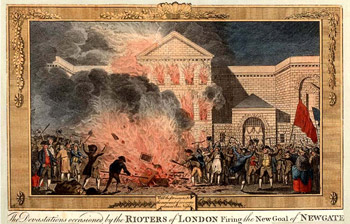 The Old Bailey Online celebrates its tenth birthday this month (15 April 2013) after attracting over 34 million page views since it went live in 2003.

The website, a collaboration between the University of Sheffield and the University of Hertfordshire (joined for its second phase by the Open University), contains a searchable archive of proceedings from the Old Bailey trials from 1674 to 1913 and has been used by scholars, students and the general public over the past decade to uncover multiple hidden histories and has inspired TV and radio series as well as several similar online resources.

Old Bailey Online has so far had over 34 million page views, more than 5 million visits and 3.5 million unique users from all over the world.

The website also provided the inspiration for the three series of the BBC One award-winning drama Garrow's Law and the Radio 4 series 'Voices from the Old Bailey', both of which connected with viewers through the BBC website.

The founders of the Old Bailey Online, Professor Robert Shoemaker from the University of Sheffield and Professor Tim Hitchcock from the University of Hertfordshire, were awarded the Longman-History Today Trustees Award for their major contribution to history. The award was given for the groundbreaking Old Bailey and follow-up London Lives projects that point the way to the future of the discipline.

In addition to the 10 year anniversary of the site, April 2013 also marks the 100th anniversary of the publication of the last ever issue of the Old Bailey Proceedings, which were published almost continuously for 240 years, from 1674 to April 1913.

Minister for Universities and Science David Willetts commented that the online trial accounts: “provide a valuable resource to academics and researchers as well as source material for creative industries. Garrows Law has used Old Bailey Online to bring to life a fascinating aspect of our history.”

Funded by the Arts and Humanities Research Council and the National Lottery, the Old Bailey Online was developed at the Humanities Research Institute at the University of Sheffield and the Higher Education Digitisation Service at the University of Hertfordshire. Since its completion the same project team have added two new resources to widen its reach. London Lives, released in 2010, contains records relating to crime, poverty and social policy in eighteenth-century London. This fully searchable resource provides access to over 240,000 manuscripts from eight archives and 15 datasets, giving access to the names of 3.4 million Londoners. Locating Londons Past, launched in December 2011, allows place names from the Old Bailey Proceedings to be mapped onto John Rocque's 1746 map of London and the first accurate modern Ordinance Survey Map (1869-80).

A pioneer online historical resource, the Old Bailey Online has inspired countless other online projects. It is also included in several larger web resources, including Connected Histories, a search interface for 22 online historical databases totalling over 15 billion words. Connected Histories, funded by Jisc, was developed by the same team at Sheffield and Hertfordshire that created the Old Bailey Online, in collaboration with the University of London's Institute of Historical Research. It enables users to explore resources such as the Old Bailey trials alongside a wealth of other historical records.

Professor Shoemaker said: "The Old Bailey Online has been used in many, many ways we never anticipated. We are particularly proud of the fact it is a free resource, open to all, and we continue to be amazed at the creative work it facilitates."

Professor Hitchcock added: "It is the everyday details and the voices of the poor that continue to shock; and as the years have gone by, new voices and new details rise to surface almost daily. The site has helped make a new history from below possible."

To help celebrate the Old Bailey Online's tenth anniversary, the website is hosting a blogothon where accounts of researchers' and teachers' experience using the site will be posted - everyone is welcome. If you have a blog, all you need to do is publish a post sometime around the weekend of 13-14 April and let the team know about it - posts will be linked to here: Old Bailey Online Tumblr

To get involved in the blogathon event visit:
Old Bailey Online Blogathon

About the University of Hertfordshire

The University is the UK’s leading business-facing university and an exemplar in the sector. It is innovative and enterprising and challenges individuals and organisations to excel.

The University of Hertfordshire is one of the region’s largest employers with over 2,650 staff and a turnover of almost £233 million.

With a student community of over 27,200 including more than 2,800 students from eighty-five different countries, the University has a global network of over 175,000 alumni.

It is also one of the top 100 universities in the world under 50 years old, according to the new Times Higher Education 100 under 50 rankings 2012.