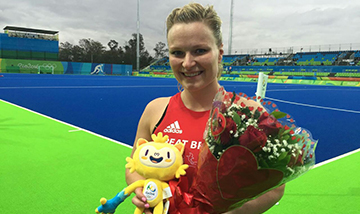 This time last year, Hollie and the team competed in the IAAF World Championships in Beijing, which saw them win their first Euro title for 14 years. In 2014, Hollie also led the team to success by winning silver at the Glasgow Commonwealth Games.

Thanks to donations from the Alumni Fund and other donors, the ESPS is able to offer a small number of athletes a scholarship of up to £1,000, which they can then use to help fund their training and competitions. This allows many students the chance to take part in training camps and events that they previously wouldn’t have been able to afford to attend.

Speaking in 2012 when she was awarded the scholarship to help provide support for her training, she said: "Without the scholarship I wouldn’t be able to play at the level I am and do well at University, so it’s helping me to reach my goals. Before coming to University I had a part time job to pay for transport so I could get to training. Now I’m at University I wouldn’t really have been able to work, so something would have had to give. The scholarship was one of the reasons I chose to come to the University as there are not many others that would offer something like this." 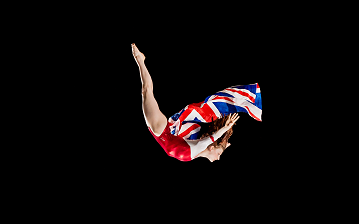 Bryony, the first British trampolinist ever to qualify for an Olympic final, was overjoyed by the medal win - her previous best global ranking had been fourth place at the 2010 World Championships.

Bryony studied Biology at the University of Sheffield's Department of Animal and Plant Sciences, and has described the support she received from the department to balance her intensive training and academic studies.

Speaking in 2014 as she was awarded the University's Chancellor's Medal Bryony said: "I have to give an incredible amount of credit to the Department of Animal and Plant Sciences for their support and flexibility in understanding my goals to achieve academic excellence while maintaining my dream to be an elite athlete and competing for my country.

"My department helped me arrange my timetable so I could fit both study and training, allowing me to concentrate on trampolining near major competitions and alternatively focusing on exams and coursework deadlines when my training schedule allows."

In a light-hearted reference to her Sheffield studies, Bryony took a good luck memento with her to Rio - a dinosaur lunchbox given to her by her younger brother. During her degree, Bryony wrote a dissertation on the sounds dinosaurs would have made 'or that we think they made':

"They probably didn't have the vocal chords to roar like they did in the movies," Bryony explained, but probably squawked or chirped like birds.

Bryony was also a recipient of a University of Sheffield’s Elite Sports Scholarship (ESPS) and has said that this support was vital in helping students balance out their academic life and sporting lifestyle. 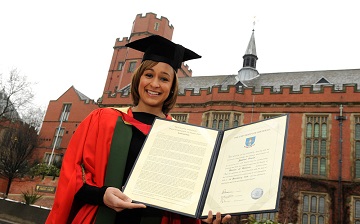 University of Sheffield alumna and current World heptathlon champion Jessica Ennis-Hill claimed silver in the fight to defend her Olympic title she won back at the London 2012 Olympic Games.

The 30 year-old, who studied Psychology at the University before graduating in 2007, gained 6,775 points - but she missed out on gold due to a challenge from Belgian athlete, Nafissatou Thiam who achieved 6,810.

Jessica has worked with fellow Sheffield alumnus and long-time coach Toni Minichiello, to become one of the best athletes in the world.

It was at the London 2012 Olympics that she won gold on what became known as ‘super Saturday’ following two other golds for Team GB on the same day.

After overcoming the heartbreak of missing the Beijing 2008 Olympics due to injury, her medal haul began a year later when she won the gold medal at the World Championships in Berlin in 2009, before winning gold again at the European Championships in Barcelona and scooping silver in Daegu in 2011.

Jess took time out to have her son Reggie in 2014 but was back at the top in 2015 - winning gold at the World Championships.

Miles Stevenson, Director of Alumni and Donor Relations at the University of Sheffield, said: "Jessica Ennis-Hill's achievements in the sporting arena are outstanding and the result of extreme dedication and hard work. She is an inspiration and we at the University, together with everyone in Sheffield, are immensely proud of her.”

Jessica received an honorary degree from the University of Sheffield in January 2010 and was patron of the University's Elite Sports Performance Scheme (ESPS).

Jessica was also awarded the University's Chancellor's Medal in 2008 in recognition of her outstanding athletic achievements.

We are proud of all our alumni competing at the Olympics and congratulate them on their efforts and achievements representing their country as Olympians.

The Olympics are taking place in Brazil for the first time, a country that the University has strong connections with. In addition to our alumni Olympians, we have 265 alumni based in Brazil, including new Alumni Board member Guilherme Guimaraes, who was the Sponsorship Manager for the Rio 2016 bid committee and was head of sports for Twitter in Brazil during the Brazil 2014 FIFA World Cup, before starting his own sports marketing consultancy.

Our alumni in Rio