Maps showing competing countries from across the globe swelling in relation to their Olympic medal hauls have been created by a researcher from the University of Sheffield. 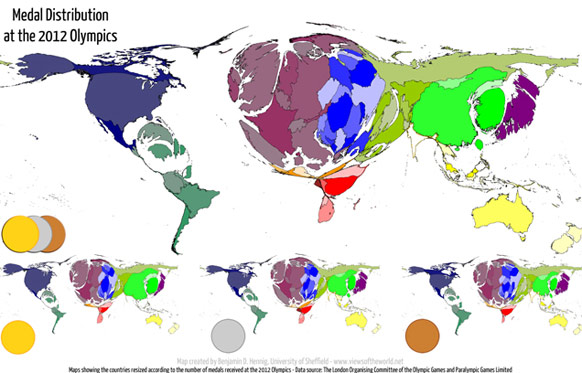 The colourful maps offer an alternative way of viewing the medal count of Team GB, and the other 204 countries’ medal taking part in this year’s games.

“The wealthier parts of the world tend to have the larger teams, with Europe dominating the stage by far. At the other end of the scale are countries such as Bhutan, and others, with only two athletes.

“That pattern is carried forward to the winner’s podium, where in large the wealthier parts of the world are represented, even if some great exceptions have made quite some headlines. The map shows the final medal tables in Worldmapper-style cartograms, with the main map representing the total medal count, and the smaller inset map splitting these numbers into separate maps of gold, silver and bronze medals, each resizing a country according to the number of medals that it has received.”

Dr Hennig will also be revealing the results of the 2012 Paralympic Games which begin on Wednesday 29 August 2012, and end Sunday 9 September 2012.