Researchers at the University of Sheffield have moved one step closer to a gene therapy that could silence the faulty SOD1 gene responsible for triggering a form of motor neurone disease also known as amyotrophic lateral sclerosis (ALS). 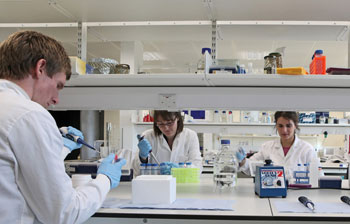 Scientists from the Sheffield Institute for Translational Neuroscience (SITraN) have begun groundbreaking research to develop a gene therapy that, if successful, could cure one form of the devastating neurological disease which affects more than 5,000 people in the UK.

Until now, all available treatments and drug-trials conducted across the world have failed to effectively halt the progression of the condition. Riluzole, the only drug that has demonstrated a survival benefit, prolongs life for just three to six months and may not be effective in all patients.

Professor Mimoun Azzouz, leading Gene Therapy Scientist and Chair of Translational Neuroscience, said: “This pioneering project has the potential to deliver the first meaningful neuroprotective therapy for MND, offering a real beacon of hope for patients and their families living with this cruel disease.

“Silencing the SOD1 gene that is associated with 20 per cent of familial MND cases may be as close as we can get to a cure for MND in the near future. Our ultimate goal is to get the gene therapy for SOD1-related MND into the clinic as soon as possible. Gene therapy is regarded as an innovative technique with huge potential for the treatment of neurological conditions including motor neurone disease.

“We plan to use the gene therapy initially in an inherited form of MND caused by alterations in a gene known as SOD1, but we intend to broaden the approach to other groups of MND patients in the future. ALS/MND is characterised by the progressive loss of nerve cells (motor-neurons) that connect the brain with the muscles to control movements. As the disease progresses, patients may lose the ability to walk, move, eat, talk and finally breathe.”

“MND is considered a rare disease and therefore tends to be overlooked in terms of funding for the development of new therapies,” said Professor Pam Shaw.

“This emphasises the importance of the extremely generous donation made by a philanthropist based in the USA, for our gene therapy research programme and for our patients with MND who don’t have time to wait.”

“The experience that we have accumulated with our gene therapy and Clinical Trials programmes at SITraN is crucial to develop this new therapy for patients with ALS/MND. We plan submission for regulatory approval by August 2015, for permission to take this therapy to patients in the clinic. ”

Researchers at SITraN will now start a large preclinical study before the first-in-human clinical trial. The team are also currently preparing for the first ever UK gene therapy trial in humans for Spinal Muscular Atrophy (SMA) which is a childhood form of MND.

Sheffield institute for Translational Neuroscience
SITraN is a leading global facility which is an essential development in the fight against motor neuron disease and other common neurodegenerative disorders of the motor system.

The key vision of SITraN is to develop an international centre of excellence for basic through to applied research in neurodegenerative disease to complement the existing partnerships of academic research groups, government and charitable research funding bodies the pharmaceutical industry and the health care sector. For more information please visit http://sitran.dept.shef.ac.uk/

The University of Sheffield
With almost 25,000 of the brightest students from around 120 countries, learning alongside over 1,200 of the best academics from across the globe, the University of Sheffield is one of the world’s leading universities.
A member of the UK’s prestigious Russell Group of leading research-led institutions, Sheffield offers world-class teaching and research excellence across a wide range of disciplines.
Unified by the power of discovery and understanding, staff and students at the university are committed to finding new ways to transform the world we live in.
In 2014 it was voted number one university in the UK for Student Satisfaction by Times Higher Education and in the last decade has won four Queen’s Anniversary Prizes in recognition of the outstanding contribution to the United Kingdom’s intellectual, economic, cultural and social life.
Sheffield has five Nobel Prize winners among former staff and students and its alumni go on to hold positions of great responsibility and influence all over the world, making significant contributions in their chosen fields.
Global research partners and clients include Boeing, Rolls-Royce, Unilever, AstraZeneca, Glaxo SmithKline and Siemens, as well as many UK and overseas government agencies and charitable foundations.