Scientists at the University of Sheffield have identified a protein which causes cells to eat their dying neighbours, helping to prevent inflammation – something which is vital in the fight to stop cancer spreading. 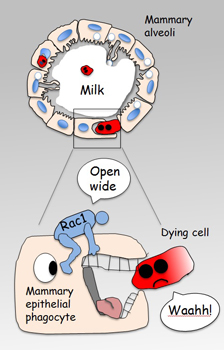 Researchers discovered the Pac-Man like Rac1 protein switches cell function and causes cells to respond to ‘eat me’ signals omitted from their dying neighbouring cells and clears them away efficiently to minimise damaging inflammation which is linked to a variety of diseases including cancer.

The team, led by Dr Nasreen Akhtar from the University’s Department of Oncology and Metabolism, made the breakthrough while studying the female breast to better understand how the organ gets rid of dead cells and surplus milk when it is no longer required.

In pregnancy, specialized epithelial cells within the breast grow to form alveoli that secrete milk. When the milk supply is no longer required the alveoli die and the breast reverts back to a non-pregnancy state. Breast epithelia also line the mammary ducts which transport milk towards the nipple when required.

Through gene deletion studies, Dr Akhtar and her team found the Rac1 protein is crucial both for the secretion of milk and its removal in the drying-up period that follows.

Inflammatory phagocytes from the immune system are normally recruited to clear up dead cells lurking in tissues and surplus fluids. If too many are recruited for extended periods, they can trigger inflammation within tissues, causing damage.

The study found that the breast epithelia use Rac1 to evade harmful inflammatory phagocytes from the immune system by hijacking their job.

In the first few days after weaning, live breast epithelia eat their dying neighbours and swallow all of the secretions, clearing the ducts from old milk and dead cells. The phagocyte-like breast epithelia then die themselves and these are subsequently cleared up by professional phagocytes from the immune system.

Dr Akhtar said: “By doing the job themselves, the breast epithelia limit both the numbers and time of immune phagocyte infiltration which protects the tissue from becoming damaged.

“Without Rac1, the dead cells and milk flood the interconnecting breast ducts causing them to bloat and triggering chronic inflammation. The bloated ducts then fail to regenerate and produce milk in a future pregnancy.”

Dr Akhtar originally began the research in 2009 in collaboration with Professor Charles Streuli whilst at the University of Manchester.

“It is thought that we shed the equivalent of our own body weight in dead cells every year,” said Dr Ahktar.

“However, very little is known about how we get rid of them. If immune phagocytes were the only cell type to clear up cell corpses our bodies would be continuously inflamed. It’s quite likely that epithelial engulfment occurs in many other organs because this cell type forms the building blocks of our bodies.

Over 90 per cent of cancers come from epithelial cells which is why unlocking the mystery of how they work is essential. It is fundamental to understand how healthy cells work properly in order to fully appreciate why they go wrong when cancer develops, and how best to combat the disease.

The study, which is published today (Monday 12 September 2016) in the journal Developmental Cell will be hugely beneficial to cancer biologists.

Dr Akhtar added: “Rac1 is over expressed in various cancers including breast cancer and Rac1 inhibitors are currently being considered as anticancer therapies.

“However, until now virtually nothing was understood about what Rac1 does in healthy tissue and our study shows that in the breast one of its central roles is to prevent harmful inflammatory responses. Without Rac1 these responses are heightened and prolonged within tissues.

“Given that sustained inflammation is linked to cancer progression, the findings show that blocking Rac1 might not be a good idea.”