A Sheffield MP was voted as the 2015 'Inspiring Leader’ in higher education at last night’s Guardian University Awards (18 March 2015), for his work supporting a campaign by the University of Sheffield and its Students' Union to highlight the crucial value of international students to the UK. 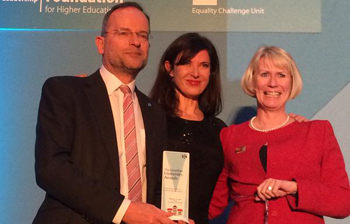 Sheffield Central MP Paul Blomfield won the award for his work in parliament championing higher education and in particular his focus on international students and postgraduate students, including backing the University of Sheffield’s groundbreaking #weareinternational initiative.

Since 2013 the University and its Students’ Union have led the way in supporting international students with the pioneering #weareinternational campaign which is now supported by more than 100 UK universities and colleges, the British Council and the Home Office.

As part of his support for the campaign, Mr Blomfield, a former General Manager at Sheffield Students' Union, has hosted two parliamentary events for the launch of videos, led by the University of Sheffield, which help talented students from across the globe better understand how to apply to study at the UK’s leading universities.

An expert panel of 37 judges for the university awards shortlisted Paul and the award was decided by a public vote.

Paul Blomfield said: "It’s a huge honour to win this award. I’d like to thank everyone who voted for me and has supported my work since I was elected in 2010. I’ve tried to be a champion in Parliament for our universities and students, and promote their huge academic, cultural, social and economic contribution. I’m proud to represent a constituency which includes two world-class universities and is home to 36,000 students, more than any other in the country.

"I’m continually inspired by the way both of Sheffield’s universities give life-changing opportunities to people of all ages, and I want more people to have these opportunities."

To find out more about the #weareinternational campaign, visit We Are International.