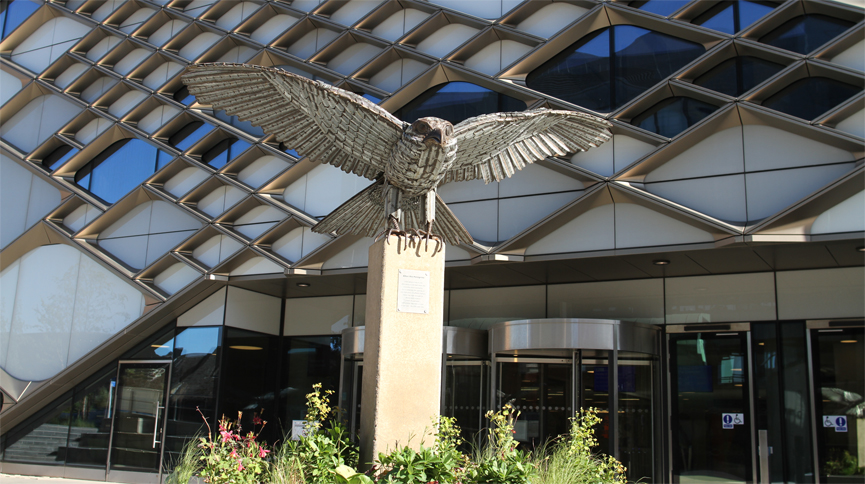 A sculpture of a peregrine falcon made of 17,000 allen keys has found a new home at the University of Sheffield - within sight of the nest of its real-life counterparts.

The sculpture was created by metal-working artist Jason Heppenstall to mark the opening of Sheffield’s new Ikea store in 2017. Previously located in Sheaf Square, outside Sheffield station, the sculpture will now greet visitors to the University’s campus and the £81m Diamond building.

Professor Vanessa Toulmin, Director of City and Culture was an advisor and consultant in the commissioning of the Allen sculpture. She said:

“We're absolutely delighted to be able to give Allen a home on the University of Sheffield's campus. Within sight of St George's where the peregrine falcons have successfully nested since 2012, Allen will take pride of place outside the Diamond and be seen by thousands of students, staff and visitors to campus everyday."

“I relish a challenge and Allen was definitely that! We thought through a few ideas and settled on a peregrine as it is both an iconic shape and synonymous with Sheffield. Looking back to the moment when the 17,000 allen keys were delivered to my studio to the response I got when Allen was unveiled is an amazing journey and I was truly overwhelmed by the response. I also find it heartwarming to know that his next home will be close to St George’s Church where the peregrines take roost. I look forward to seeing Allen in his new home.”

Since arriving at St George’s, the real-life peregrines have successfully raised 20 chicks, including three in 2018. Over the past six years, the urban peregrines have become a regular feature in Sheffield’s skyscape, after the Sheffield Peregrines breeding project was kick-started by the Sheffield Bird Study Group, backed by the University. Nesting platforms were specially erected for the birds, and the University installed panoramic webcams over the church lecture theatre to keep an eye on the peregrines in their nest and prevent tampering.

Professor David Wood, from the University's School of Languages and Cultures, is Chair of the Sheffield Bird Study Group. He said:

“The peregrines at St George's have really captured the imagination of people in Sheffield, both at the University and more widely, as well as across the UK and beyond. There's something special about having these icons of wilderness and speed right here in the city and it was a thrill to see that their popularity had resulted in the statue. Having it here on campus would be an entirely fitting 'migration' as the statue comes to the Peregrines' home territory.”

The Sheffield Bird Group is fundraising to help continue its work with the peregrines. Donations can be made at https://uk.virginmoneygiving.com/Team/sheffieldperegrines