Students from the University of Sheffield are building a device capable of quickly diagnosing bacterial infections, which could help doctors improve the way they prescribe treatment for patients. 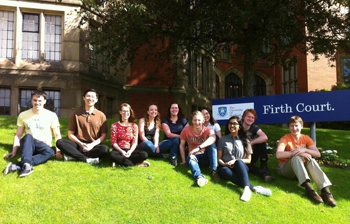 The new tool could help doctors make more informed prescriptions, which in turn could help to tackle antibiotic resistance by reducing the number of patients with viral infections being prescribed antibiotics.

Plans for the new tool, which could differentiate between bacterial and non-bacterial infections, are being showcased at iGEM 2016 – a leading international competition held in Boston, USA, where some of the world’s brightest student scientists unveil their latest innovations.

The Sheffield students hope that the device could be placed in GP surgeries or walk-in centres to enable patients with flu-like symptoms to give a small blood sample and be promptly told whether they have a bacterial or non-bacterial infection and be treated accordingly.

The diagnostic tool uses genetically engineered bacteria to detect the presence of a bacterial infection in a patient’s blood sample.

The protein’s function is to bind to small molecules which bacteria use to access iron in order to grow.

The Sheffield team, which consists of students from a range of science, engineering and medicine disciplines, are developing the device so that genetically modified bacteria mixes with a patient’s blood sample and turn florescent when there are low levels of the lipocalin protein – indicating a viral not bacterial infection.

Saylee Jangam, a student from the University of Sheffield’s iGEM team, said: “The main aim behind this project is to create more informed prescriptions to address the ever increasing resistance against antibiotics that we face today.

“Antibiotic resistance is a huge problem and this is why we chose to base our project on it. We may not be able to reverse it, but with our device, we could potentially slow it down.

The University is currently conducting world-class research into infectious diseases. Sheffield scientists across all levels of study are developing radical solutions to global problems of disease and antimicrobial resistance as part of projects including Florey, Imagine, and the Sheffield Antimicrobial Resistance Network (SHAMROK). These are signature research projects addressing some of the world’s biggest biomedical problems.

For more information on the opportunities to study science, engineering and medicine courses at the University, please visit: https://www.sheffield.ac.uk/study/