Scientists at the University of Sheffield are fighting an incurable type of cancer with a pioneering new approach which could not only halt devastating bone damage, but also repair it. 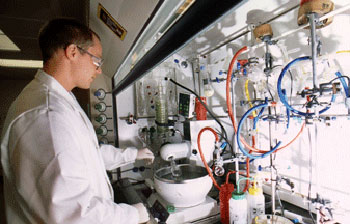 A ground breaking research programme developing new drugs to tackle myeloma is now underway thanks to a £1.1 million grant from the charity Leukaemia and Lymphoma Research.

Senior Clinical Lecturer in Haematology, Dr Andrew Chantry, and his team at the University's Medical School and Department of Biomedical Sciences are working towards a revolutionary treatment for the disease.

Myeloma is a cancer of the white blood cells that causes bone marrow and renal failure, as well as debilitating bone disease. Despite often successful chemotherapy, patients will relapse and life expectancy after diagnosis for older patients is just three and a half years.

Dr Chantry said: "As well as eventually being fatal, myeloma causes substantial pain and loss of mobility. We hope to significantly improve current treatments by testing a range of new compounds which can stimulate the bone formation process and help regrowth of healthy bone.

“We believe that relapse happens because a certain percentage of myeloma cells are able to lie dormant and avoid treatment. If we can detect how these cells are distinct from other myeloma cells, we can use combinations of recently introduced chemotherapy drugs to target them.”

As well as studying the effects of a range of anti-cancer and bone formation drugs in the laboratory, the researchers will use cells from myeloma patients to conduct genetic research into the causes of myeloma.

Professor Chris Bunce, Research Director at Leukaemia & Lymphoma Research, said: “This project directly addresses both the need to eradicate those cancer cells which can avoid standard chemotherapy and the need for drugs to target the devastating bone disease caused by myeloma.

“If this laboratory research is successful, it will pave the way for clinical trials in patients. It has the potential to decrease suffering and take strides towards establishing a cure for the disease.”

Around 30,000 people of all ages, from children to adults are diagnosed with blood
cancers such as leukaemia, lymphoma and myeloma in the UK every year.

We receive no government funding and rely entirely on voluntary support. In the
next five years we need to raise £120 million to continue our lifesaving work.
Further information, including patient information booklets, is available from
beatingbloodcancers.org.uk or on 020 7405 0101.

The University of Sheffield
With nearly 25,000 of the brightest students from 125 countries coming to learn alongside 1,181 of the world’s best academics, it is clear why the University of Sheffield is one of the UK’s leading universities. Staff and students at Sheffield are committed to helping discover and understand the causes of things - and propose solutions that have the power to transform the world we live in.