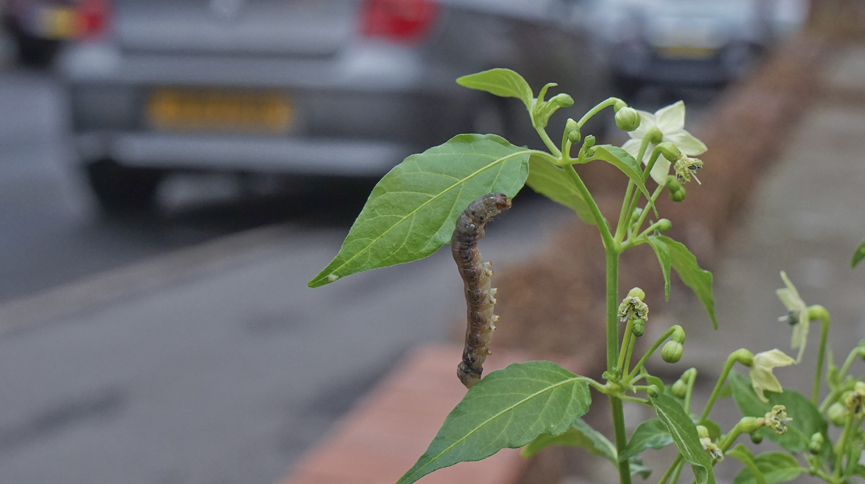 High levels of pollution found in many of the world’s major cities are having negative effects on plants and insects, according to new research from the University of Sheffield.

The study, published in Nature Communications, reveals that plants exposed to high levels of nitrogen dioxide (NO2) – similar to levels recorded in major urban centres – are able to better defend themselves against herbivorous insects.

Led by Dr Stuart Campbell from the University’s Department of Animal and Plant Sciences, the research has discovered that plants exposed to increased levels of pollution produce more defensive chemicals in their leaves.

Results from the study show that insects feeding on these leaves grew poorly, which suggests high levels of air pollution may be having cascading negative effects on communities of herbivorous creatures.

Dr Campbell, who is also part of the P3 Centre – a centre of excellence for translational plant science at the University of Sheffield, said: “Nitrogen dioxide is a pollutant that causes severe health problems in humans, but our research has found that it may also be having a significant impact on plants and insects.

“Insects are a crucial part of nature and the world we live in. Insects are critical to the healthy functioning of ecosystems.

“Many people may be aware that insect pollinators, such as the thousands of species of bees, along with flies, moths and butterflies, are crucial for food production – but they also ensure the long-term survival of wildflowers, shrubs and trees.”

Dr Campbell added: “Insects that feed on plants (herbivorous insects) help return plant nutrients to the soil, and are themselves food for wild birds, reptiles, mammals, and yet more insects. Insects are also immensely important for decomposing decaying organic matter and maintaining healthy soils. Scientists are warning about massive declines in insect numbers, which should be incredibly alarming to anyone who values the natural world and our sources of food.

“Nitrogen dioxide is a major component of smog and is an example of pollution caused from human activity, particularly our reliance on fossil fuels. Levels of this pollutant in the atmosphere remain particularly high in cities, and especially in the UK. Our research shows another example of the dangers of pollution to our environments and the reasons why we need to make a united effort to tackle it.”

The international team of scientists, which includes a researcher now based at the US Environmental Protection Agency, also looked at whether insects have an effect on the ability of plants to absorb NO2 from the environment.

Plants that had been fed on by insects absorbed much less NO2, according to the study. The authors believe this indicates that insects could be influencing the amount of pollution removed from the air by urban green spaces. Urban trees can absorb gaseous pollutants like NO2, but the effects appear to vary between species and locations, and this may be due in part to the actions of leaf-feeding insects. Dr Campbell emphasised, however, that the primary concern would be for the insects themselves, and that further research is needed: “Research suggests that urban vegetation plays a modest role in taking up NO2. More work is needed, because many factors may influence the effect of urban plants on air quality, including herbivory. Plant feeding insects, however, face a number of different human threats, potentially including air pollution.”

The study, Plant defences mediate interactions between herbivory and the direct foliar uptake of atmospheric reactive nitrogen, is published in the journal Nature Communications.

The University of Sheffield’s Department of Animal and Plant Sciences is a leading department for whole organism biology, with the UK’s highest concentration of animal and plant researchers.

It is among the top five animal and plant research centres in the country for research excellence, according to the last Research Excellence Framework in 2014.

Animal and plant scientists at Sheffield study in locations from the Polar Regions to the tropics, at scales from within cells up to entire ecosystems. Their research aims both to understand the fundamental processes that drive biological systems and to solve pressing environmental problems.

The P3 Centre (Plant Production and Protection) at the University of Sheffield aims to apply exemplary theoretical research to tackle real world problems surrounding food sustainability. Find out more about P3 and how to collaborate with its experts in plant and soil science by visiting: http://p3.sheffield.ac.uk/

For more information on studying at the University’s Department of Animal and Plant Sciences, visit: https://www.sheffield.ac.uk/aps/index