Pubs numbers fall as convenience stores spread, with biggest changes in deprived areas, according to study

One in 10 pubs closed in England between 2001 and 2013 while the numbers of supermarkets and convenience stores more than doubled, according to a new study by the University of Sheffield’s Alcohol Research Group (SARG). 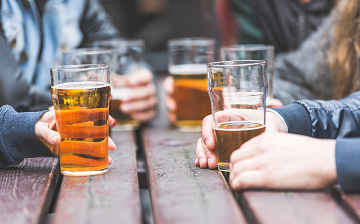 The study also found that alcohol is more easily available to buy in the most deprived areas compared to less deprived postcodes, with three times as many outlets selling alcohol within walking distance on average.

Across the country as a whole, alcohol is readily available in communities with 85 per cent of postcodes having a shop or pub selling alcohol within 500m. The average distance from any postcode to a place selling alcohol is only 323m.

Although the total number of outlets selling alcohol has fallen over time in the most deprived areas, a substantial switch from large numbers of pubs to large numbers of convenience stores means that the availability of cheap alcohol is likely to have increased significantly in those areas.

The study, funded by the National Institute for Health Research's School for Public Health Research and Alcohol Research UK, raises important concerns about the availability of alcohol, especially in deprived areas which are more affected more by alcohol-related health problems.

There are substantial health inequalities in England, with people in the lowest socioeconomic group dying on average six years earlier than those in the highest. Reducing inequalities in health is a key priority across the globe and tackling alcohol-related harm plays a major role in reducing the gap.

Colin Angus, Research Fellow at the University of Sheffield who led the study, said: “Our research shows a major change in how people obtain their alcohol. Small supermarkets and convenience stores, where alcohol is commonly available at low prices, have proliferated in recent years. At the same time, the numbers of pubs - which sell alcohol at a higher price - has decreased dramatically.

“What is especially concerning is that these trends are most pronounced in deprived areas, which we know are particularly affected by alcohol-related harm.”

Research in this area by the University of Sheffield has been influential in informing current debate on alcohol policy and continues to work with government, charities and other organisations to make recommendations on alcohol pricing and availability.

The outlet data came from market research companies CGA Strategy and Nielsen, with deprivation measured using the Index of Multiple Deprivation, the measure preferred by the government.

The National Institute for Health Research (NIHR) is funded by the Department of Health to improve the health and wealth of the nation through research. Since its establishment in April 2006, the NIHR has transformed research in the NHS. It has increased the volume of applied health research for the benefit of patients and the public, driven faster translation of basic science discoveries into tangible benefits for patients and the economy, and developed and supported the people who conduct and contribute to applied health research. The NIHR plays a key role in the Government’s strategy for economic growth, attracting investment by the life-sciences industries through its world-class infrastructure for health research. Together, the NIHR people, programmes, centres of excellence and systems represent the most integrated health research system in the world. For further information, visit the NIHR website (www.nihr.ac.uk)

The School for Public Health Research (SPHR) is funded by the National Institute for Health Research (NIHR). SPHR is a partnership between the Universities of Sheffield, Bristol, Cambridge, Exeter, UCL; The London School for Hygiene and Tropical Medicine; the LiLaC collaboration between the Universities of Liverpool and Lancaster and Fuse; The Centre for Translational Research in Public Health, a collaboration between Newcastle, Durham, Northumbria, Sunderland and Teesside Universities. For further information, please visit http//:www.sphr.nihr.ac.uk