Pufferfish and humans share the same genes for teeth

Human teeth evolved from the same genes that make the bizarre beaked teeth of the pufferfish, according to new research by an international team of scientists. 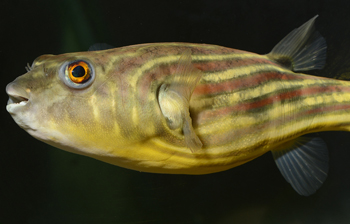 The study, led by Dr Gareth Fraser from the University of Sheffield’s Department of Animal and Plant Sciences, has revealed that the pufferfish has a remarkably similar tooth-making programme to other vertebrates, including humans.

Published today (Monday 15 May 2017) in the journal PNAS, the research has found that all vertebrates have some form of dental regeneration potential. However the pufferfish use the same stem cells for tooth regeneration as humans do but only replace some teeth with elongated bands that form their characteristic beak.

The study’s authors, which include researchers from the Natural History Museum London and the University of Tokyo, believe the research can now be used to address questions of tooth loss in humans.

“Our study questioned how pufferfish make a beak and now we’ve discovered the stem cells responsible and the genes that govern this process of continuous regeneration. These are also involved in general vertebrate tooth regeneration, including in humans,” Dr Fraser said.

He added: “The fact that all vertebrates regenerate their teeth in the same way with a set of conserved stem cells means that we can use these studies in more obscure fishes to provide clues to how we can address questions of tooth loss in humans.”

The unique pufferfish beak is one of the most extraordinary forms of evolutionary novelty. This bizarre structure has evolved through the modification of dental replacement.

The beak is composed of four elongated ‘tooth bands’ which are replaced again and again. However, instead of losing teeth when they are replaced, the pufferfish fuses multiple generations of teeth together, which gives rise to the beak, enabling them to crush incredibly hard prey.

Students at Sheffield have access to the latest innovations in animal and plant sciences – giving them an opportunity to deepen human understanding of organisms, ecosystems and the interdependencies of life to build a sustainable future.

Alex Thiery, a PhD student at the University of Sheffield who contributed to the study said: “We are interested in the developmental origin of the pufferfish beak as it presents a special opportunity to understand how evolutionary novelty can arise in vertebrates more generally.

“Vertebrates are extraordinarily diverse, however this doesn't mean that they are dissimilar in the way in which they develop. Our work on the pufferfish beak demonstrates the dramatic effect that small changes in development can have.”

In an additional study published in the journal EvoDevo, Dr Gareth Fraser and his team from the University of Sheffield have also found that shark skin teeth (tooth-like scales called denticles) have the same developmental origins as reptile scales, bird feathers and human hair.

Previous studies have revealed that human hair, reptile scales and bird feathers evolved from a single ancestor – a reptile that lived 300 million years ago – but this new study from the Fraser Lab at Sheffield has found that the skin teeth found on sharks also developed from the same genes.

Sharks belong to a more basal group of vertebrates and their scales have been observed in the fossil record over the course of 450 million years of evolution, so the Sheffield researchers believe this indicates that all vertebrates, whether they live on land or in the sea, share the same developmental programme for skin, teeth and hair that has remained relatively unchanged throughout vertebrate evolution.

“Our study suggests the same genes are instrumental in the early development of all skin appendages from feathers and hair to shark skin teeth. Even though the final structures are very different this paper reveals that the developmental origins of all these structures are similar. Evolution has therefore used these common underpinnings as a foundation that can be modified over time to produce the vast diversity of skin structures seen in vertebrates,” Dr Fraser added.

The study, Developing an ancient epithelial appendage: FGF signalling regulates early tail denticle formation in sharks, is published in EvoDevo and can be accessed via: https://evodevojournal.biomedcentral.com/articles/10.1186/s13227-017-0071-0

The paper, Spatially restricted dental regeneration drives pufferfish beak development, is published in PNAS and can be accessed via the University’s Media Team.

For more information on studying animal and plant sciences at the University of Sheffield, please visit: https://www.sheffield.ac.uk/aps/index

The Natural History Museum welcomes more than five million visitors a year and is a world-leading science research centre. The Museum was named the Cultural Attraction of the Year at the London Lifestyle Awards 2016, voted by the public. Through its unique collection and unrivalled expertise it is tackling the biggest challenges facing the world today. It helps enable food security, eradicate disease and manage resource scarcity. It is studying the diversity of life and the delicate balance of ecosystems to ensure the survival of our planet. nhm.ac.uk