A medical student at the University of Sheffield has been awarded a Queen’s Birthday Honour for his outstanding services to volunteering during the Covid-19 pandemic. 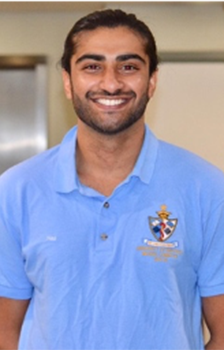 The initiative, which launched in March shortly after the nationwide coronavirus lockdown, saw more than 400 Sheffield medical students provide voluntary support in clinical and community roles across South Yorkshire.

On receiving the honour, Hasnain said: “I was extremely shocked when I got the email, and at first I did wonder if it was genuine!

“I am so proud of all our volunteers, who have made such a difference to support our communities and staff on the NHS frontline, and I am honoured and grateful to be recognised for our efforts.”

Sheffield medical students launched the Helping Hands scheme to support their future colleagues and to ease pressure on the NHS at a critical time.

Students volunteered in hospitals and GP surgeries across South Yorkshire, delivering medication to patients at home, taking bloods and evaluating patients, taking medical histories and answering phones to free up time for other staff. They also volunteered in community centres to care for the elderly, cooked and delivered meals and provided babysitting and childcare support for NHS workers.

Hasnain, who leads MedSoc, one of the oldest and largest societies at the University, said: “We knew that NHS staff on the frontline were working tirelessly to care for patients in extremely challenging circumstances and we wanted to do whatever we could to help.

“At Medical School we receive training and develop clinical skills that we knew could be valuable, so we felt like it was our responsibility to step up. The response from students was incredible and we have received really positive feedback about the support we were able to offer.”

He added: “I’d like to thank MedSoc’s Welfare Officers Leah Lam and Lucy Pinder, as well as Professor Michelle Marshall and Professor Deborah Murdoch-Eaton from Sheffield Medical School, for all their support in running the scheme.

“I’m so proud that we were able to make a difference.”

Professor Koen Lamberts, President and Vice-Chancellor at the University of Sheffield, said: “Hasnain is an outstanding ambassador for our Medical School and I am thrilled that he has been honoured for his extraordinary work coordinating the Sheffield Medical Students Helping Hands scheme.

“I am so proud of our medical students, who have shown such initiative and compassion to support the NHS and healthcare staff at a truly critical time - including our final year students who graduated early to share their skills on the frontline.

“They, along with so many across our University, have made a significant difference to our communities throughout this pandemic and I would like to thank them all.”

After qualifying MBChB from Sheffield in 1979, Professor Mathers did his MD in neonatal paediatrics before entering General Practice in 1987. He took up a Principal post as a single-handed GP in a deprived, inner city area of Sheffield, building up the practice to a four GP partnership.

He became Head of the Academic Unit of Primary Medical Care at the University of Sheffield in 1997. He has published acting as Principal Investigator in 17 national and international research studies with particular expertise in the evaluation of complex interventions in primary care. He has over 135 publications in peer-reviewed journals.

Professor Lamberts added: “I would like to congratulate Helen and Nigel, and everyone connected to our University who has received a Queen’s Birthday Honour.

“We are incredibly proud of the important contributions they have made to their respective fields and they are an inspiration to us all.”

Find out more about Medicine, Dentistry and Health at the University of Sheffield