Dr Minna Shkul, co-director of the Hidden Perspectives project in the Sheffield Institute for Interdisciplinary Biblical Studies at the University of Sheffield, discusses the real symbolism of eggs at Easter time.

The real symbolism of Easter eggs

Chocolate eggs may seem like the indulgent embodiment of secular, post-Christian Easter in the 21st century, which is about treats rather than traditions. However, the symbolism of eggs and their place in spring time celebrations has long roots, reflecting ancient beliefs, both pagan and Christian. The range of eggs in literature - golden, speckled or red, as well as recent chocolate or precious Fabergé eggs - are examples of diverse spring time traditions united by ideas of new life and celebration. 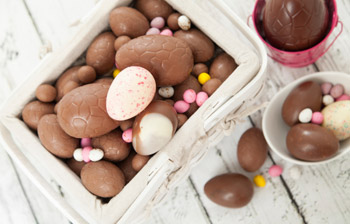 The oldest egg legends are associated with pagan rituals around spring equinox, and ancient stories of creation. The mystery of egg, with its hidden life yet to emerge was commonly associated with the creation of the universe in ancient thought: ancient Egyptians believed that gods and creatures alike came forth from eggs of creation, and likewise in Hindu mythology Hiranyagarbha, a 'golden womb' or 'golden egg', was the source of the creation.

Similar myths from Greek, Japanese, Chinese, and Oceanic cultures, as well as Russian tales of Baba Yaga, are well known. Elements of mythical waters, mystic birds and deities are combined in Nordic imagination, as in Kalevala, which tells the creation of the world from six eggs of gold, and one of iron. In many ancient legends the egg, or its yolk was associated with the sun, and the shells often imagined forming the domes of sky, and the earth, or water below.

In Christian tradition eggs have multiple meanings. They were thought to symbolise the stone on the tomb of Christ (hence egg rolling, for example at the White House), as well as Christ bursting forth from the grave. But the literary traditions and iconography are even more interesting: eggs were part of ritual eating and pagan celebrations at springtime, which could explain why they are also found in the Easter story.

Orthodox traditions maintain the association between sacred femininity and eggs in other ancient stories and ritual culture: according to Eastern Church traditions Mary Magdalene (Jesus’ followers) brought cooked eggs to share with the other women at the tomb of Jesus, but ‘lo and behold, when she met the Risen Christ at the empty tomb the eggs miraculously turned blood red.

Hence images of Mary with an egg are common in Orthodox iconography. She is often pictured with an egg and a chalice, which is thought to contain blood of Christ that Mary gathered at the cross, while the egg symbolises his resurrection. The idea is a bit gruesome - as is Jesus’ brutal execution and idea of a human sacrifice anyway - but the focus in these narratives was on the sacredness of Jesus’ blood, and it was unimaginable that it would pour onto the ground.

Russian and Eastern European custom of colouring eggs red by adding beetroot or red onion skins to boiling water comes from this tradition. Orthodox customs are also often cracked together, with each person holding an egg and bumping them against each other. The egg that remains unbroken is the symbol of resurrection, and the one which shell shatters symbolises the gates of hell shattered by Christ’s resurrection. ‘Christ is Risen’ – proclaims the winner, ‘He is risen indeed’ replies the one holding a broken egg.

Eventually the new life inside the egg was reconfigured as a surprise. One of the most extravagant surprises inside eggs emerged in delicate Fabergé eggs, made of precious metals and jewels, to Russian Tsars between 1885 and 1917. They symbolised wealth of the Romanov Dynasty and made a real innovation in terms of contemporary Easter egg-culture including surprises, such as Romanov crown symbols, or photo frames, with the picture of an egg-giver as an ornamental keep-sake.

Eggs became chocolatey in the 19th Century Europe, with first British dark chocolate eggs crafted by Cadbury in 1875. Chocolate eggs were originally often solid chocolate, but later replaced by hollow eggs with surprises. Fazer confectioners in Finland have continued to produce Mignon eggs since 1896, which are chocolate truffle eggs in genuine, unbroken egg shells, which have been emptied by piercing holes in both ends.

Recently eggs have become square, and egg-like (crème egg), in every shape and size. While others love giving and receiving Easter Eggs, shops are busy offering alternative ‘Easter treats’ and presents. Perhaps one of the most exciting alternatives is Lego egg-themed toy available in selected retailers in the UK.

Chocolate is a treat, and an aphrodisiac, which is quite fitting for celebration of life – eternal or otherwise - among many symbols of life-giving, eggs, bunnies and chicks of spring time.