The Department for Business, Innovation and Skills has today (30 October 2012) announced an award of £37.1 million to the University of Sheffield’s Nuclear Advanced Manufacturing Research Centre (Nuclear AMRC), who are working in partnership with Rolls-Royce as the lead company for the UK Nuclear supply chain. 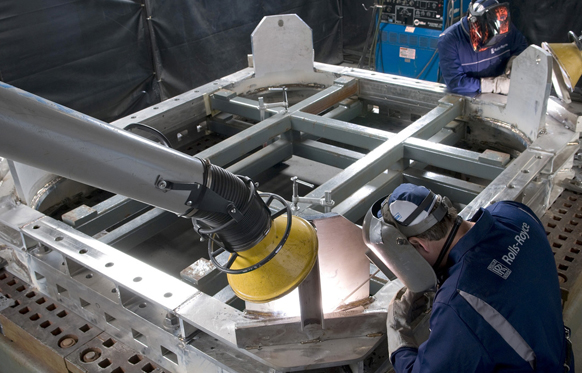 The Regional Growth Fund is designed to support a ‘programme of supplier development and manufacturing research and development to create value in the UK that would otherwise migrate overseas.’

The Nuclear AMRC has been awarded the funds – subject to the usual due diligence - to support its large-scale programme of supplier development and manufacturing research in partnership with key industrial members. The programme focuses on the Civil Nuclear new-build industry, but has broad applicability across the Nuclear value chain and other industries in the Energy sector.

Director of the Advanced Manufacturing Research Centre, Professor Keith Ridgway, said: “We are delighted with the announcement of this very important support from the Regional Growth Fund and the understanding from the Government about just how vital this work is to the UK economy. The programme we are operating at the Nuclear AMRC is ambitious and high-impact when compared to other supplier development initiatives, providing strong support for UK suppliers with aspirations to address the global Civil Nuclear new build opportunity, and creating process technology and intellectual property that will enable export-led growth and long-term competitive advantage for UK supply chains.

"This is a vital opportunity for British manufacturing companies, and we want to support the supply chain in developing the skills to operate in this high value market, in the same way as we have so successfully worked together in relation to aerospace. It is believed that this market could be worth more than £500 billion over the next ten years."

The news comes as Britain's nuclear expansion plans were boosted today after Japan's Hitachi signed a £700 million deal that will enable it to start building the next generation of power plants. The facilities, which could be feeding electricity into the national grid in the first half of the 2020s, are expected to generate power equivalent to up to 14 million homes over 60 years.

Business Secretary Vince Cable said of the Regional Growth Fund award: "Our energy sector is a vital part of our economy, and we are determined to maximise the opportunities for the UK from the nuclear and low carbon industries.

"This is an innovative Regional Growth Fund project, which will help our businesses win new orders, both here and abroad. Building strong supply chains, and long term partnerships between Government, industry and universities is a key part of the Government’s industrial strategy, and this is embodied in the work of the Nuclear Advanced Manufacturing Research Centre."

Professor Stephen Court, Operations Director at the Nuclear AMRC added: "The Nuclear AMRC is a prime example of the kind of partnership approach which is so important to our future as world-leading manufacturers. Combining industry expertise and university innovation, we work with companies to improve capabilities and performance along the nuclear supply chain. The key to our success is that our members are the manufacturers themselves, and our dedication to helping UK businesses become suppliers of choice to the global civil nuclear industry.

"To do that, we work with supply chain companies to enhance their technical capability to compete on cost, quality and delivery. We also give manufacturers clarity and knowledge on nuclear codes and standards, which helps them to meet and exceed the demanding requirements of this industry. We complement this with the training and skills development which ensures that companies are able to comply with the strict requirements of this industry."

Today’s announcement follows a string of successes for the University of Sheffield’s Advanced Manufacturing Research Centre, whose founding principles of in-depth collaboration between research and manufacturing industry has led to the award of a prestigious Queen’s Anniversary Prize and the naming of the AMRC as Boeing Supply Chain Company of the Year in 2010.

The Regional Growth Fund (RGF) is a £2.4 billion fund operating across England from 2011 to 2015. It supports projects and programmes with significant potential for economic growth that can create additional, sustainable private sector employment. It aims particularly to help those areas and communities which were dependent on the public sector to make the transition to sustainable private sector-led growth and prosperity.