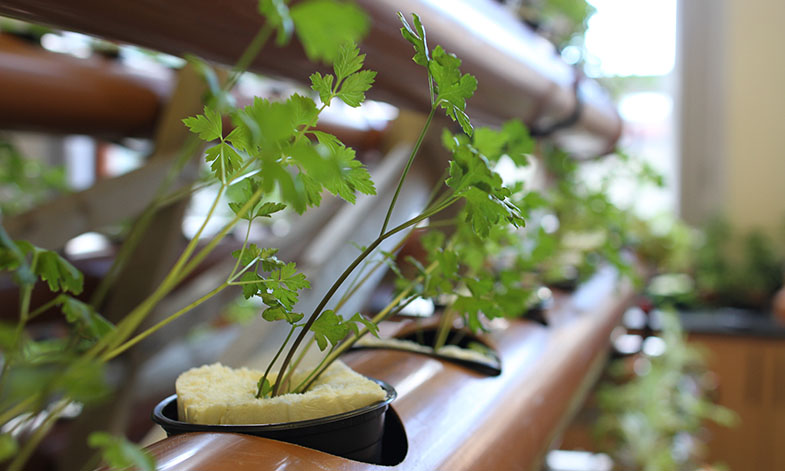 Experts from the new Institute for Sustainable Food at the University of Sheffield have found that crops planted in polyurethane foams at an urban farm grow two to 10 times faster than plants grown in soil.

Using a network of pipes, nutrient solutions, controlled growing environments and foams, scientists are growing everything from salad to tomatoes – demonstrating a potential solution to the global crisis of soil fertility.

Every year 24 billion tons of fertile soil are lost globally to erosion. So Harry Wright, a PhD student at the University’s Grantham Centre for Sustainable Futures, has developed specialist foams that chemically, physically and biologically resemble soil.

Jacob Nickles, a Knowledge Exchange Associate, has put Harry’s foams to the test, transforming an abandoned school in Sheffield into an urban farm with the installation of pioneering hydroponics systems.

The potential of the low-cost system has already been demonstrated with an initiative to install hydroponics systems made from used mattresses at a refugee camp in Jordan, led by Grantham Centre Director Professor Tony Ryan, in collaboration with Professor Duncan Cameron at the Institute for Sustainable Food.

Professor Duncan Cameron, Director of the Institute for Sustainable Food at the University of Sheffield, said: “The world is facing a crisis of soil fertility. If we’re going to fix this, we need to do something radically different.

“Urban farms that use foam instead of soil could take a lot of pressure off existing agricultural systems. And because this system is so efficient, it enables us to feed our growing population using fewer resources.

“In the future, I hope we can see farms like this all over the world, optimised for local conditions and producing cheap, healthy and sustainable food.”

The urban farm opens its doors to the public today (18 May), offering former teachers and pupils of the abandoned school a chance to see how their old classrooms have been transformed.

After opening, the farm will provide fruit and vegetables to the community in Tinsley, Sheffield, as well as training for local unemployed or low-skilled workers and an educational environment for schools.

The launch will be the first event hosted by the new Institute for Sustainable Food at the University of Sheffield – which brings together multidisciplinary expertise and world-class research facilities to help solve global problems like soil loss, achieve food security and protect the natural resources we all depend on.

The world is facing a crisis of soil fertility. If we're going to fix this, we need to do something radically different.

Professor Duncan Cameron, Director of the Institute for Sustainable Food

Leading experts from the institute will offer hands-on demonstrations, food tasting, craft workshops and talks on nutrition and growing food in cities.

Jacob Nickles said: “The Urban Farm is a physical manifestation of some of the groundbreaking work that happens at the University of Sheffield. Rather than speaking about it and publishing papers, we’ve actually built a working system for growing food.

“Today is a chance for us to start engaging with our local community – learning from them about what food they want to see the farm grow, and talking about how members of the public can get involved.”

Professor Tony Ryan, Director of the Grantham Centre for Sustainable Futures, said: “Our frontier research on synthetic soils meant we were primed to react to a waste disposal problem posed by UNHCR.

“The dirty and unusable second hand foam mattresses, considered a waste disposal problem in the Za'atari refugee camp, were identified as an alternative growth substrate and we found that potential urine contamination could actually aid growth.

“The research provides a technical fix, but also impacts on refugees’ wellbeing, in providing green space which they miss. The things we've learned from the refugees doing foam hydroponics in Za'atari laid the foundations for our urban farm in Tinsley, turning the research into impact at home.”

Tickets for the family fun day are available via Eventbrite