Rapid developments in the automation of our everyday lives have prompted a world leading multidisciplinary group of technology scholars to form the Foundation for Responsible Robotics (FRR). 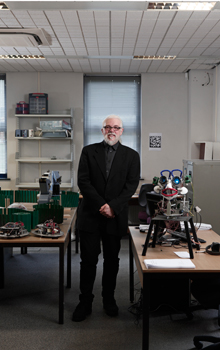 Noel Sharkey, Professor of artificial intelligence and robots at Sheffield Robotics, University of Sheffield, is the co-founder and chair of the new FRR executive board. He explained that we are on the cusp of a robotics revolution with governments and corporations looking to robotics as a powerful new economic driver.

“Despite the disruptive impact of the increasing automation in our work places, our streets and our homes, only lip service is being paid to the long list of potential societal hazards,” he warned.

With increasing advances in the technology, robots are moving out of factories to automate many aspects of our daily lives. The International Federation for Robotics predicts the number of service robots will rise to 31 million by 2018: from healthcare to the care of children and the elderly, from cooking and preparing food to making and serving cocktails, from domestic cleaning to agriculture and farming, from policing and killing in armed conflict to monitoring climate change and protecting endangered species.

The Federation also says that driverless cars and drones will change our roads forever and revolutionise our transport and delivery services.

“We urgently need to promote responsibility for the robots embedded in our society,” said Dr Aimee van Wynsberghe, co-founder and President of FRR.

“Robots are only as responsible as the humans who build and use them. We must ensure that the future practice of robotics is for the benefit of mankind rather than for short term gains. The policies governing robotics must maintain ethical and societal standards of fairness and justice.”

Professor Noel Sharkey added: “We are rushing headlong into the robotics revolution without consideration for the many unforeseen problems lying around the corner. It is time now to step back and think hard about the future of the technology before it sneaks up and bites us when we are least expecting it. We must strive for responsible and accountable developments in robotics without stifling innovation.”

FRR is also concerned about maintaining progress and innovation in robotics research.

“The public needs to be assured that new developments will be created responsibly and with due consideration of their human rights and freedom of choice,” said Professor Sharkey. “Early mistakes could set the field back by many years and stifle research.”

“The biggest concern in the UK Government’s robotics strategy is about the economic impact of the emerging technology,” added Amanda Sharkey from the Department of Computer Science at the University of Sheffield.

“They are proposing UK investment in massive innovation of the technology with no mention of any joined up thinking or commissions on its societal impact or its potential dangers for the fundamental rights of citizens.”

It is difficult for policy makers and the legislators to keep up with the rapidly emerging developments and so it is vitally important that the scientists, researchers and manufacturers develop a socially responsible attitude to their work. It is for reasons like these that more than 20 of the world’s leading emerging technology thinkers have formed the Foundation for Responsible Robotics to bring the various communities together and to offer advice and guidance.

Notes to Editors:
FRR is a not-for-profit organization founded on the belief that robots are only as responsible as the humans who build and use them and it is they who are accountable. The goal is to foster conversation about the human purposes that are implicit in the design of robots to ensure that these human purposes are made as transparent as possible and thus, open for challenge and debate. In robots, we not only project who we are but we come to affect who we will become. These are not just technical matters. They need to be made accessible to the broadest range of citizens and stakeholders.
For further information and a listing of the Founders and Executive board see http://responsiblerobotics.org password: wall-e

The University of Sheffield
With almost 26,000 of the brightest students from around 120 countries, learning alongside over 1,200 of the best academics from across the globe, the University of Sheffield is one of the world’s leading universities.
A member of the UK’s prestigious Russell Group of leading research-led institutions, Sheffield offers world-class teaching and research excellence across a wide range of disciplines.
Unified by the power of discovery and understanding, staff and students at the university are committed to finding new ways to transform the world we live in.
In 2014 it was voted number one university in the UK for Student Experience by Times Higher Education and in the last decade has won four Queen’s Anniversary Prizes in recognition of the outstanding contribution to the United Kingdom’s intellectual, economic, cultural and social life.
Sheffield has five Nobel Prize winners among former staff and students and its alumni go on to hold positions of great responsibility and influence all over the world, making significant contributions in their chosen fields.
Global research partners and clients include Boeing, Rolls-Royce, Unilever, AstraZeneca, Glaxo SmithKline, Siemens and Airbus, as well as many UK and overseas government agencies and charitable foundations.
For further information, please visit www.sheffield.ac.uk