Robots could soon be swimming in underground water pipes, finding damage and fixing leaks thanks to a major new research project led by the University of Sheffield. 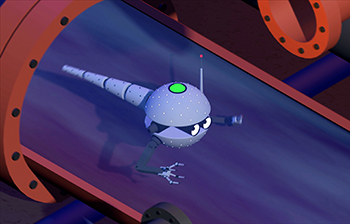 A collaborative team led by the University of Sheffield, working with the Universities of Bristol, Birmingham and Leeds, has received £7 million from the Engineering and Physical Sciences Research Council (EPSRC) plus a £2 million contribution from the four universities to develop intelligent ways to find damaged underground water and sewage pipes so they can be repaired without disruptive excavation.

The programme will look at other innovative ways to combine new navigation and communication technology to help utility companies inspect and monitor buried pipes.

At present it can be extremely difficult to find out when and where underground pipes are damaged and utility companies often have to rely on digging up roads and pavements to find out the exact problem.

This means that 1.5 million roads are excavated in the UK every year to fix damaged buried pipes, causing road closures and disruption to business totalling approximately £5.5 billion.

The new research programme will investigate ways in which robots can move freely and intelligently through complex underground networks to map and inspect pipes. These autonomous robots will be able to communicate and share data to ensure pipe defects are identified early and repaired, avoiding disruption for households and businesses.

Our new research programme will help utility companies monitor hidden pipe infrastructure and solve problems quickly and efficiently when they arise. This will mean less disruption for traffic and general public.

Professor Kirill V Horoshenkov, from the University of Sheffield’s Department of Mechanical Engineering, who is the lead academic for the project, said: “Maintaining a safe and secure water and energy supply is fundamental for society but faces many challenges such as increased customer demand and climate change.

“Our new research programme will help utility companies monitor hidden pipe infrastructure and solve problems quickly and efficiently when they arise. This will mean less disruption for traffic and general public.”

He added: “This innovation will be the first of its kind to deploy swarms of miniaturised robots in buried pipes together with other emerging in-pipe sensor, navigation and communication solutions with long-term autonomy.”

This work will be done in collaboration with a number of industry partners including key water utilities in the UK who will help to develop a set of requirements for the new pervasive robotic sensing platform to work in clean water, wastewater and gas pipes. They will support the formation and operation of the new research Centre of Autonomous Sensing for Buried Infrastructure in the UK and ensure that the results of this research have strong practical outcomes.

In October this year, the University of Sheffield opened the Integrated Civil and Infrastructure Research Centre (ICAIR), part funded by the ERDF, which hosts the UKCRIC National Distributed Water Infrastructure Facility, a uniquely powerful experimental facility for investigating underground distributed water infrastructure. The ICAIR - part funded by the European Regional Development Fund- is fundamental to the proposed research programme to test and to demonstrate the new robotics technology platform to end-users.

The programme will also make use of the UKCRIC National Buried Infrastructure Facility (NBIF) at the University of Birmingham.