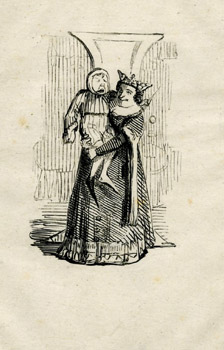 The birth of the Royal baby is expected to spark a surge of interest in Connected Histories, as users explore how royal births and their reception have changed throughout history.

The search engine allows researchers to collect and share important sources for British history in one place, showing up unexpected connections and surprising parallels, whether from 19thcentury newspapers, the records of courts and parliaments, or drawings. It also allows sophisticated searching of names, places and dates.

The University of Sheffield’s HRI developed and maintains the search engine which drives the Connected Histories website, comprising around 30 billion items of data which have been analysed using language algorithms to facilitate searching by keyword, person name, place and date.

A search for terms related to ‘royal births’ highlights a wealth of information drawn from historical sources across British history, revealing changes in medical practices, celebrations and cultural behaviours. Highlights include:

Professor Bob Shoemaker, Director of Research at the University of Sheffield’s Department of History, said: “The significance of events like this lies in large part in the long historical tradition in which they are situated. By providing unprecedented access to an extraordinarily rich collection of documents, Connected Histories revolutionizes the possibilities for anyone interested in history to find out more about our fascinating past.”

Jane Winters, Head of Publications and IHR Digital at the University of London’s Institute of Historical Research, said: “Researchers have benefited enormously from the digitisation of historical sources over the past couple of decades, by universities, archives, libraries and commercial organisations. However, varying access arrangements and methods of production have meant that many of these resources are under-exploited and the opportunities of the digital have not yet been fully realised. Connected Histories is conceived as a means of overcoming some of the barriers to access, by offering a simple route in to a huge and varied corpus of research materials. With a single search, the precedents and historical context for any major public event, such as a royal birth, can easily be discovered, in both image and text.”

Paola Marchionni, Programme Manager at Jisc, said: "When Jisc funded Connected Histories to offer a unified entry point to a range of diverse historical collections, we didn't know it would become one of our ‘jewels in the crown’. Since then the site has grown from strength to strength doubling the number of collections it now cross searches and establishing itself as a key online resource for the study of British history. "

The Humanities Research Institute (HRI) is the University of Sheffield's institute for interdisciplinary research in the arts and humanities, with particular specialism in the digital humanities. To find out more visit: HRI

The Institute of Historical Research (IHR), founded in 1921, is one of 10 member Institutes of the School of Advanced Study, University of London. It is home to two important research centres and a major open access library, hosts over 60 seminar series and offers doctoral supervision in a wide range of historical subjects. It has a substantial publishing programme, hosts a number of innovative digital research projects, administers fellowships, runs specialist research training programmes and organises a variety of conferences and workshops each year. For further details, see IHR

The School of Advanced Study, University of London is the UK’s national centre for the promotion and facilitation of research in the humanities and social sciences. The School brings together 10 prestigious research institutes to offer academic opportunities, facilities and stimulation across a wide range of subject areas for the benefit of the national and international scholarly community. The member institutes of the School are the Institutes of Advanced Legal Studies, Classical Studies, Commonwealth Studies, English Studies, Germanic & Romance Studies, Historical Research, Musical Research, Philosophy, Study of the Americas, and the Warburg Institute. The School also hosts a cross-disciplinary centre, the Human Rights Consortium, dedicated to the facilitation, promotion and dissemination of academic and policy work on human rights. SAS

Jisc offers digital services for UK education and research, owned by the Association of Colleges (AoC), GuildHE and Universities UK (UUK). The charity enables people in higher education, further education and skills in the UK to perform at the forefront of international practice by exploiting fully the possibilities of modern, digital empowerment, content and connectivity.

Jisc has been at the forefront of the practical application of technology in schools, colleges and universities for over two decades. We’ve earned a reputation as a trusted partner for the education and research sectors and today we combine the latest in digital thinking, network and IT services with access to content and resource procurement to deliver new and better ways of working for all customers to achieve operational advantage.

Find out more at JISC