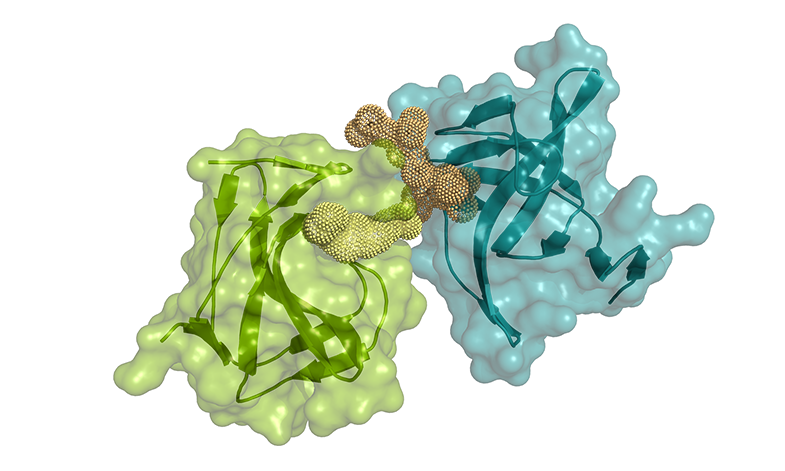 Scientists from the University of Sheffield have discovered how a potent bacterial toxin is able to target and kill MRSA, paving the way for potential new treatments for superbugs.

New research, led by Dr Stéphane Mesnage from the University of Sheffield, has explained how lysostaphin specifically recognises MRSA cell walls and quickly causes the breakdown of this pathogen.

The lysostaphin is able to increase the number of its molecules bound to the surface of the MRSA cell and this allows the enzyme to ‘walk’ along the cell walls and cause rapid breakdown.

Lysostaphin is an enzyme that has been shown to eradicate Staphylococcal infections, such as MRSA, alone or in combination with antibiotics. Although it was discovered over 50 years ago, not much has been known about how it kills these infections.

The scientists hope to use their findings to develop new treatments for MRSA and other antibiotic resistant superbugs which target the infection in a similar way.

MRSA is a bacterial superbug that is resistant to several antibiotics and frequently spreads in hospitals where people are more susceptible to infection.

Dr Stéphane Mesnage, Senior Lecturer in Molecular Biology and Biotechnology, said: “Lysostaphin is arguably the most studied enzyme after lysozyme, so we are delighted that our research is able to explain the mechanism underpinning its potent antibacterial activity.

“Our study explains how this enzyme is able to target and digest the MRSA bacteria and why it is so potent. Hospital-acquired infections caused by bacteria resistant to last resort antibiotics are on the rise, but our work could lead to the development of new treatments for these superbugs that use the same targeting mechanism.”

The Department of Molecular Biology and Biotechnology at the University of Sheffield is focused on studying DNA, RNA (Ribonucleic Acid) and proteins, and how they affect biological function such as host-pathogen interactions. Researchers work on topics from genomics and nucleic acids, to plants and photosynthesis, with the aim of addressing the major global challenges of food security, antimicrobial resistance and an ageing population. Many of its scientists are following in the footsteps of Sir Hans Krebs, the department’s first Professor of Biochemistry, who was awarded the Nobel Prize in Physiology or Medicine in 1953.