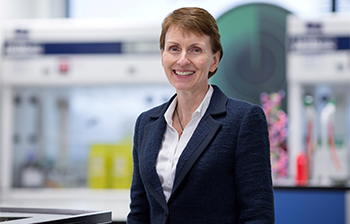 In May 1991, aged just 27, Dr Sharman was selected for the Anglo-Soviet Project Juno mission after responding to a radio advertisement asking for applications to be the first British astronaut.

After undertaking 18 months of training, she became the first Briton to go into space and the first woman to visit the Mir space station. During her mission she was involved in various experiments about the effects of weightlessness on physical, chemical and biological systems.

Since graduating in 1984 with a Bachelor of Science in Chemistry from the University of Sheffield, Dr Sharman has become a leading ambassador for science and, in 1993, was appointed an OBE for her pioneering accomplishments.

She has also overseen a range of specialist facilities and laboratories used for teaching and research, and was appointed President of the Institute of Science and Technology (IST) in October 2015. Dr Sharman has been an active advocate for technicians in higher education and works closely with the University of Sheffield’s Technical Development and Modernisation programme.

She will receive her honorary degree in recognition of her outstanding achievements in a ceremony at 12pm on Thursday 20 July 2017.

Dr Sharman will also be unveiling a plaque to officially open the University of Sheffield’s world-class teaching and research facilities at The Diamond on Thursday 20 July at 10am. The state-of-the-art Diamond facility provides students with specialist engineering teaching facilities and houses a range of lecture theatres, virtual reality labs, seminar rooms, open-plan learning spaces, library services and social spaces. 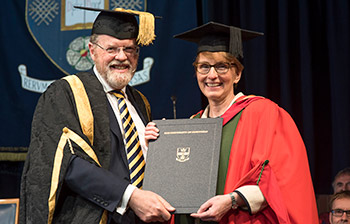 The University has a long tradition of inviting people of distinction to open its buildings - including HM King Edward VII, HM Queen Elizabeth the Queen Mother and the poet T.S. Eliot.

A leading researcher, an Air Vice-Marshal in the Royal Air Force and one of the UK’s leading forensic scientists are among the others who will also receive honours during the University of Sheffield’s graduation week.

Working in the field of microalloyed high strength steels, Dr J Malcolm Gray is a leading researcher and company president whose development work has had a transformative influence on the global transport, energy and construction industries.

In 2016, Dr Gray was presented a top Chinese government award - the Foreign Expert Friendship Award - by Vice Premier Ma Kai in recognition of his services to the steel and line pipe industries.

Dr Gray, who graduated from the University and achieved his PhD in 1965, will pick up his honorary degree on Wednesday 19 July 2017 at 3.30pm.

University of Sheffield alumnus Air Vice-Marshal Alan Johnson, who was born in Hemsworth, Yorkshire, will be honoured on Thursday 20 July at 3.30pm for his outstanding service in the Royal Air Force.

In 1957, Alan Johnson was commissioned into the Royal Air Force where he served in the UK, Germany, Borneo, Cyprus, Singapore and the USA before retiring in 1991 and being appointed first Director of Occupational Health and then Chief Medical Officer for the Metropolitan Police Service. He is also Patron of the South Yorkshire Aircraft Museum in Doncaster.

One of the country’s leading forensic scientists, Professor Angela Gallop, will receive an honorary degree of Doctor of Science from the University for her contribution to research and forensic science.

Throughout her career, Professor Gallop has lead numerous scientific teams responsible for solving complex cases, including the Stephen Lawrence and Rachel Nickell murders.

Professor Gallop, who graduated from the University of Sheffield in 1971, is a Past President of the Forensic Science Society and was awarded a CBE in 2015 for services to forensic science.

Sheffield alumnus David Fyfe will be honoured on Friday 21 July at 9.30am for raising £1million for Sheffield Children’s Hospital.

Together with friends Nigel and Sandra Worthington and his wife, Jean, David organised a ‘one-off’ ball for the charity in 1990. Today, the now-annual Daffodil Ball is one of the most popular events on the Sheffield social scene and has raised huge sums for one of the region's most well-loved charities.

The first female Chairman of the Ipswich Building Society, Sarah Evans, will also be receiving a distinguished alumni award on Tuesday 18 July at 9.30am.

Sarah was appointed the first female Chairman of the Ipswich Building Society in 2013, before becoming a partner at Ernst and Young, where she has made huge contributions in the investigation of fraud and financial irregularity.

An internationally renowned product designer, Sebastian Conran has overseen thousands of successful and enduring products through from concept to the consumer. His design studio, Sebastian Conran Associates, works with industry-leading clients across the world including Nissan, John Lewis and Villeroy & Boch. He was appointed the University of Sheffield’s Designer in Residence in 2012 and is a co-founder of Consequential Robotics, a University spin-out company that focuses on the development of next-generation consumer and commercial robots.

A distinguished medical scientist, Gordon Duff was the Lord Florey Professor of Molecular Medicine at the University of Sheffield for 24 years before his current role as Principal of St Hilda’s College, Oxford. He is also the Chair of the UK Biotechnology and Biological Sciences Research Council. His research has been critical to the use of monoclonal antibodies as revolutionary therapy for rheumatological diseases. He was knighted for services to public health in 2007.

Professor Brian Edwards has had an eminent and influential career in health services management, both in the UK and overseas. He held a series of top management posts in the NHS, including Regional General Manager of the Sheffield-based Trent Regional Health Authority, before joining the University as Professor in Health Care Development. He was the first Dean of the School of Health and Related Research, later becoming Deputy Dean of the Faculty of Medicine. He was awarded a CBE in 1988.

A graduate of the University of Sheffield, Professor Angela Gallop (BSc Botany 1971) is one of the country’s leading forensic scientists. Her reputation is based upon her skills in setting up and running full-scale forensic science laboratories and for leading the scientific teams responsible for solving complex cases, including the Stephen Lawrence and Rachel Nickell murders. She is a Past President of the Forensic Science Society and was awarded a CBE in 2015 for services to forensic science.

Working in the field of microalloyed high strength steels, Dr J Malcolm Gray is a leading researcher and company president whose development work has had a transformative influence on the global transport, energy and construction industries. Growing up in South Yorkshire, he studied metallurgy at this University (AMET 1961, MMET 1962, PhD 1965) before moving to the USA, where he founded the Microalloyed Steel Institute. His many honours include the Foreign Expert Friendship Award from the People’s Republic of China.

Professor Peter Hunter is the Director of the Auckland Bioengineering Institute and is a world leader in computational biomechanics. He is a valued supporter of the University of Sheffield’s work in this field, including the Insigneo Institute for in silico medicine. His many honours include the Rutherford Medal, New Zealand's top science award, a Kea World Class New Zealand Award and the New Zealand Order of Merit. He also holds several honorary or visiting professorships around the world.

Alan Johnson (MBChB Medicine 1956) was commissioned in the Royal Air Force in 1957. During an illustrious career, he served in the UK, Germany, Borneo, Cyprus, Singapore and the USA. He retired from the RAF in 1991 as an Air Vice-Marshal, having held the position of Principal Medical Officer for Strike Command, and was appointed first Director of Occupational Health and then Chief Medical Officer for the Metropolitan Police Service. He is now the Patron of the South Yorkshire Aircraft Museum.

David Moody was Lord-Lieutenant of South Yorkshire for 11 years, retiring in 2015. His career began in the steel industry, culminating in the role of Chairman and Managing Director of Spartan Sheffield Ltd. He has been President of the Sheffield Chamber of Commerce and Chairman of the South Yorkshire Investment Fund. The Queen appointed him to the Royal Victorian Order in 2014, and he became an Honorary Freeman of Barnsley last year.

Dr Helen Sharman was the first Briton in space as a member of the expedition to the Russian space station, Mir, in 1991. She is a graduate of the University of Sheffield (BSc Chemistry 1984) and has ably exploited her experiences in scientific outreach, particularly to children. She is the Operations Manager for the Department of Chemistry at Imperial College London, and is the President of the Institute of Science and Technology.

One of the world’s leading statisticians and cancer researchers, Professor Simon Tavaré studied probability and statistics at this University (BSc 1974, MSc 1975, PhD 1979). Throughout his career, he has demonstrated the profound influence of mathematics on fundamental developments in biological research. He is the Director of the Cancer Research UK Cambridge Institute, a Fellow of the Royal Society, a Fellow of the Academy of Medical Sciences and the President of the London Mathematical Society.