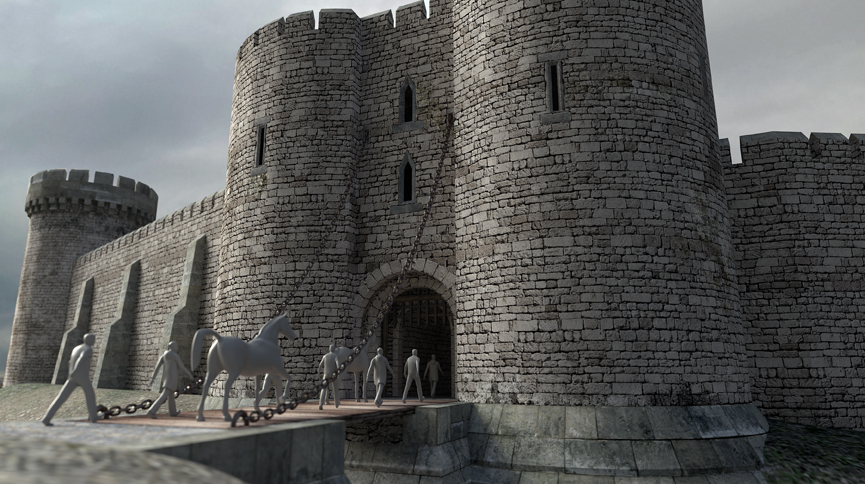 One of the most powerful castles in medieval northern England can now be viewed for the first time since it was erased from the face of its city hundreds of years ago, thanks to an interactive augmented reality experience developed by researchers at the University of Sheffield.

The augmented reality experience, which has been developed as part of an Arts and Humanities Research Council-funded project led by Professor Dawn Hadley and Professor John Moreland from the University’s Department of Archaeology, Carolyn Butterworth from the School of Architecture, and Dr Steve Maddock from the Department of Computer Science, is giving people an opportunity to see Sheffield Castle in unprecedented detail.

Visitors to the experience will be able to see a full virtual model of the castle in what is believed to be the most accurate visual impression of the castle ever produced.

The product of a collaboration between Sheffield-based creative agency Human, staff and students in the University’s School of Architecture, led by Carolyn Butterworth, and a team of computer scientists at the University directed by Dr Steve Maddock, the AR experience is based on research by University of Sheffield archaeologists on material uncovered from excavations at the castle in the 1920s and 1950s that is currently curated by Museums Sheffield.

Professor Dawn Hadley said: “Sheffield Castle was almost completely destroyed during the English Civil War and most of what does remain of its original structure has been hidden away from the public for hundreds of years. This is one of the main reasons why the castle and its history are largely unknown, but now we hope that with the creation of this augmented reality experience people will be able to see the castle in all of its glory and learn more about its fascinating history.”

Professor John Moreland added: “Sheffield Castle has a remarkable history but it’s a real shame that its story is not as well-known as some of the more popular castles in the north of England. It was a Royalist stronghold during the civil war and it was seen as such a threat and strategically important that parliamentary forces ordered it to be destroyed. Its history is also closely connected to the birth of the city of Sheffield, so we hope that the new augmented reality model will enable people to explore this forgotten chapter of Sheffield’s medieval origins.”

Sheffield Castle was once one of the grandest and most powerful in the north of medieval England. It was home to some of the great families of the time – including the de Furnivals, Nevils, Shrewsburys and Howards.

Mary Queen of Scots was held prisoner there for 14 years between 1570 and 1584, before she was executed in 1587. The castle was then destroyed by Parliament following the Civil War in 1646.

Carolyn Butterworth, Senior University Teacher in the School of Architecture, said: "Bringing the Castle back to life through AR is a fantastic tool to show people the hidden yet rich history of Castlegate and engage them in conversations about the area's future.

"At the Festival of the Mind visitors can see the digital model of the Castle appear on a large physical model of the modern city, built by our students, alongside their architectural visions for the future of the site. This project is part of a continuing process of co-production with different departments and faculties across the University, working with local businesses, community groups and Sheffield City Council, both to change the way we experience the past and to inform how we might envisage the future."

Nick Bax, Creative Director of Human added: “This formidable medieval castle is an important part of Sheffield's past that many people are unaware of. We are thrilled to have been involved in returning it to the memory of the city together with academics from the University of Sheffield and hope that it will help to forge a new future for the Castlegate area."

The AR experience is set to be unveiled for the public to view as part of Festival of the Mind – a 10 day city-wide festival showcasing some of the latest pioneering research from the University in collaboration with Sheffield’s creative, cultural and digital industries.

The exhibition runs from Thursday 20 September to Thursday 27 September 2018 in the Millennium Gallery, Sheffield.

For a full list of events, visit Festival of the Mind.