Roll up, roll up! Sheffield’s show heritage on display 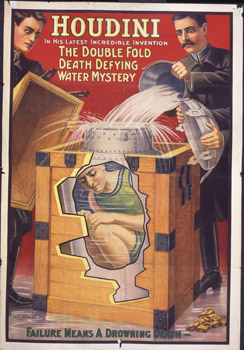 The University of Sheffield’s Professor Vanessa Toulmin opens the doors to her new exhibition of shows, fairs and circuses in Sheffield over the past 200 years this week (Thursday 7 February – 6 May 2013).

Visitors to the free exhibition at the National Fairground Archive (based at Western Bank Library) will be able to see original posters, footage and rare artefacts from two centuries of amusement and entertainment in the city. The exhibition will provide rare audio visual treats including films and recordings of the acts and a film of the University taken in 1905.

Drawing on the National Fairground Archive’s extensive collections and with material kindly loaned from Museums Sheffield and the Local Studies Collection, the exhibition covers the world of illegitimate entertainment, the growth of the music hall and variety in the 20th century, the world of magic, early cinematograph shows and the travelling funfairs that are part of the history of Sheffield.

Professor Vanessa explained: “Sheffield has a long and important association with the travelling fairground community. Modern fairs are held almost weekly within the city boundaries, but historical fairs such as Crookes Feast and Sheffield Christmas Fair no longer exist.

“Up until the 1930s, Sheffield’s great Christmas Fair held on Blonk Street was one of the most prominent travelling fairs in the United Kingdom. Famous show-families such as the Lings, the Pullens, the firm of Farrar’s Fun Fairs, the Waddingtons, the Holmes and the Whitings have all been part of the city’s entertainment fabric for many generations.”

One of the most popular acts in Sheffield during this golden age was Professor De Lyle, whose conjuring show included magic lantern recitals and early cinematograph performances. Born Arthur George Fox in 1871, the inspiration for his stage name came from the famous Lyle’s treacle. His daughter Winnie was a ventriloquist who started performing aged nine alongside her father. Based on Ecclesall Road, they were a familiar and popular sight to the people of Sheffield. Both father and daughter entertained wounded soldiers during the Great War, a tradition that Winnie continued during the Second World War.

Many items in the exhibition have been kindly donated by the families of these famous show people, including the descendants of Professor De Lyle, the Hodson family, Hamilton Kaye and Fred Holmes.

In 1930, a dirt track racer left Owlerton Stadium to become a Wall of Death rider with the Wizards on the Wall. For three years Sheffield’s own Captain Billy Bellhouse toured Europe on his speedy Indian Scout motorcycle alongside Rotherham’s finest Skid Skinner and female rider, Alma Johnson.

From 1895, many of the famous names from the golden age of magic began to delight audiences at the Empire in Sheffield. Harry Houdini appeared there on seven separate occasions and his final visit was in 1920. In 1911 he performed his famous Milk Churn Water Escape act as vividly captured on the poster from the time.

Large variety palaces started to become part of the Sheffield landscape in the 1890s, in addition to theatres and music halls. Within a few years, three of these modern palaces were constructed: the Attercliffe Palace and the 2,000-seater Frank Matcham-designed Empire in 1895 and in 1897, W.G.R. Sprague’s Lyceum which still stands today.

Sheffield has one of the richest heritages in early film in the country thanks to early film pioneer Jasper Redfern and Frank Mottershaw’s Sheffield Photo Company. Local optician Jasper Redfern emerged as both film-maker and exhibitor during the late 1890s and by 1899, both the filming of events and the exhibition of films were a regular feature in the city.

Professor Vanessa said: “I’m delighted to be opening up Sheffield’s rich entertainment heritage to the public. There are so many rare gems in this exhibition, from famous names like Harry Houdini to local heroes that made their mark on the industry such as Fred Holmes with the amazing collection of 350 handbills and posters donated by his grandson Roger Waterhouse. We’re thrilled to have all this fantastic material in one place for the next three months for everyone to come and enjoy.”

The exhibition is curated by Professor Vanessa Toulmin and Amanda Bernstein, with audio visual materials curated by Andrew Moore.