Scientists at the University of Sheffield have revealed how male insects evolved to sing powerful love songs when competing for female attention in a new study published this week (13 October 2017). 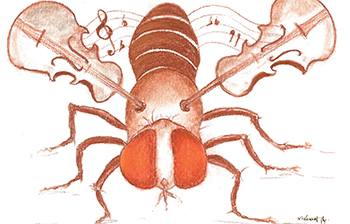 The study, performed by Dr Allan Debelle and Dr Rhonda Snook from the University of Sheffield’s Department of Animal and Plant Sciences, investigated the love songs which male fruit flies sing in order to court a female.

Published in the journal Animal Behaviour, the research team, which also included Professor Mike Ritchie from the University of St Andrews and Dr Alexandre Courtiol from the Leibniz Institute for Zoo and Wildlife Research in Berlin, recorded the love song of male fruit flies from the species Drosophila pseudoobscura under different experimental conditions. In this species, males sing a love song by rapidly beating their wings, at a rate of around 6,000 beats per minute.

To test how female choice can affect the evolution of male characteristics, groups of flies were kept for 110 generations in either male-biased populations (where every female could choose among several males) or in populations where monogamy was enforced (where a female only has access to one male).

At the end of this selection process – eight years of mating in captivity – the researchers found that males from the populations where females could choose their mate displayed more power and endurance when singing their love song than their counterparts that had evolved under enforced monogamy.

The tempo difference recorded between the songs of the two kinds of males corresponds to more than three times the difference in tempo between reggae and house music.

Dr Allan Debelle, co-first author from the University of Sheffield, said these results suggest that mate choice can be an important driver of the evolution of motor performance, such as muscle power and endurance: “Our research shows that when, at each generation, females are given a choice among several mates performing energetically costly courtship, the motor performance of males in that population responds to this selection process and progressively improves.”

“Because singing in fruit flies involves an important muscular effort, one possibility is that males under female selection did not solely evolve better singing skills but an overall better physical performance. Consistent with this, the researchers found that such males not only sing at higher tempo than the others, but they can also maintain a higher tempo for longer.”

Dr Alexandre Courtiol, co-first author of this study, added: “Our findings also suggest that when females aren't choosing their mate, males evolve to invest less energy in the construction of powerful bodies and demonstration of spectacular feats."

This study will be published in the journal Animal Behaviour on 13 October 2017.

Results from the study give students at Sheffield access to the latest innovative research which is deepening human understanding of organisms, eco-systems and the interdependencies of life.

Study Biology, Zoology, Ecology and Conservation Biology, and Plant Sciences at the University of Sheffield