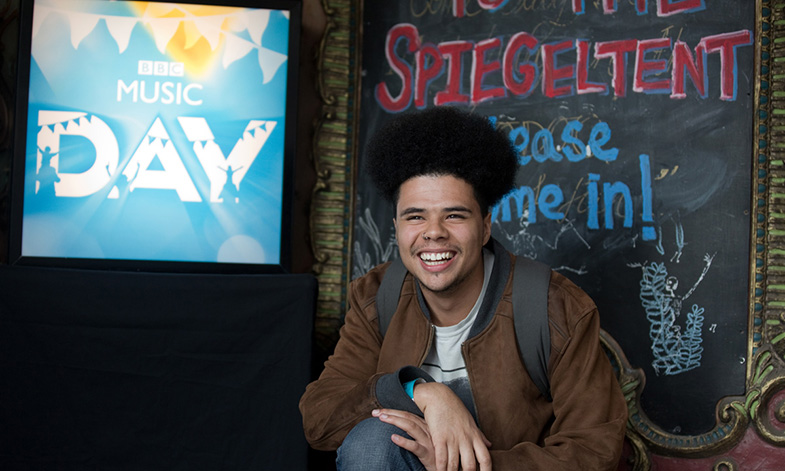 Sheffield city centre will be transformed into a stage for a series of exhilarating performances on BBC Music Day (26 September 2019).

The University of Sheffield is hosting the fourth Sheffield Makes Music - an official part of the BBC’s annual UK-wide programme of events celebrating the power of music to change lives.

Sheffield Makes Music will weave musical sounds through the city centre including Fargate, Orchard Square and Castlegate showcasing the brilliant musical creators, contributors and talent Sheffield has to offer through a range of acoustic, choral, electronic and pop performances.

Visitors to the city centre will experience amazing sounds in unexpected places - with performances by artists including Tixxy Bang, LIO, Opera on Location, Steve Edwards, Surf Muscle, Before Breakfast, Sheffield Philharmonic Chorus and the Sheffield Makes Music Pop Up Orchestra.

University of Sheffield alumni, Jon McClure of Reverend and the Makers, will form a one-off ‘supergroup’ - including band member Ed Cosens and Kweku Sackey of K.O.G and the Zongo Brigade. This special Sheffield/Ghanian fusion performance will end the day at the Big Yellow Bus on Fargate at 6.30pm.

Sheffield Makes Music - which will run from 11am-7pm - has been organised by the University of Sheffield in partnership with BBC Music Day and supported by Sheffield BID, Sheffield City Council, Orchard Square, Yellow Arch Studios and The Leadmill.

Professor Vanessa Toulmin, Director of City and Culture at the University of Sheffield, said: "We're delighted to once again be delivering Sheffield Makes Music in partnership with the city's talented local musicians and venues. We were spoilt for choice in pulling together the programme as there is such an array of amazing and diverse talent across the city.

"By staging the vast majority of events in walking distance of each other, the city centre will be full of energy and life with a musical backdrop which only Sheffield can deliver. I challenge everyone to come along and perhaps listen to a different musical genre or sound that they haven't before - you won't fail to be impressed with how Sheffield Makes Music."

On Fargate, the Sheffield Makes Music Mash Up Stage @ Yellow Bus will host a diverse line-up of Sheffield music makers for visitors to enjoy.

Sheffield’s Poet Laureate Otis Mensah will host a feast of words and music at his Mash Up House @ Orchard Square, as well as compering and performing at various points throughout the day.

He said: “I feel blessed to be a part of Sheffield Makes Music. It’s imperative that we celebrate and champion the artists that sow our music scene together and build up legacies of culture in the city; Sheffield Makes Music is an opportunity to do exactly that. On this stage are some of the most innovative artists of our time whose work embodies poetic vulnerability throughout; artists impacting and inspiring change, uniting people here in Sheffield and far beyond.”

The Leadmill will once again host its Leadmill Acoustic Trail, leading visitors on a merry dance around shops, bars and cafes to celebrate the city’s burgeoning talent. Outdoors @ Kommune, organised with help from Delicious Clam, will include performances by the best creative DIY musicians in the city.

Yellow Arch Studios, based in the heart of Kelham Island, will host Dopamine Disco - a project set up by Simon Brown, in collaboration with Yellow Arch Studios and Dr John O’Connell, after years of exploring sounds and making music to alleviate the symptoms of Parkinson’s Disease. Simon personally discovered an incredible relief from the tremors, muscle stiffness and depression attributed to the disease through music and dancing.

All events are free unless otherwise specified in the programme.