New research has unravelled the mystery of how mitochondria – the energy generators within cells – can withstand attacks on their DNA from rogue molecules. 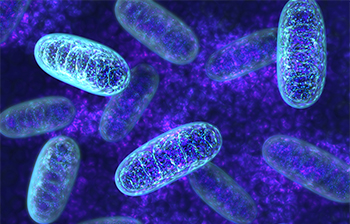 The findings could pave the way for new treatments to tackle neurodegenerative diseases and cancer. The research could also have important implications for clinical advances in ‘mitochondrial donation’ - known as the ‘three-parent baby’ - used to correct defects in faulty mitochondria.

=The five-year study led by scientists at the University of Sheffield, published today (28 April 2017) in Science Advances, reveals how the enzyme TDP1 - which is already known to have a role in repairing damaged DNA in the cell’s nucleus - is also responsible for repairing damage to mitochondrial DNA (mtDNA).

Mitochondria are the powerhouses of cells, they generate the energy required for all cellular activity and have their own DNA – the genetic material which they rely upon to produce important proteins for their function.

During the process of energy production and making proteins, a large amount of rogue reactive oxygen species are produced which constantly attack the DNA in the mitochondria. These attacks break their DNA, however the new findings show mitochondria have their very own repair toolkits which are constantly active to maintain their own DNA integrity.

Lead author of the study, Professor Sherif El-Khamisy, a Wellcome Trust Investigator and Chair of Molecular Medicine at the University of Sheffield, said: “Each mitochondria repair toolkit has unique components – enzymes - which can cut, hammer and seal the breaks. The presence of these enzymes is important for energy production.

“Defects in repairing DNA breaks in the mitochondria affect vital organs that rely heavily on energy such as the brain. It also has implications on mitochondria replacement therapies recently approved in the UK and known as ‘three parent babies’.”

Although much research has focused on how free radicals damage the DNA in the cell’s nucleus, their effect on mitochondrial DNA is less well understood despite this damage to mtDNA being responsible for many different types of disease such as neurological disorders.

The team further identified a mechanism through which mtDNA can be damaged and then fixed, via a protein called TOP1, which is responsible for untangling coils of mtDNA. When the long strands become tangled, TOP1 breaks and quickly repairs the strands to unravel the knots. If free radicals are also attacking the mitochondrial DNA, then TOP1 proteins can become trapped on the mitochondrial DNA strands, making repair even more difficult.

Professor El-Khamisy believes the findings could pave the way for the development of new therapies for mitochondrial disease that boost their DNA repair capacity, or for cancer treatments which could use TDP1 inhibitors to prevent mtDNA repair selectively in cancer cells.

“Cancer relies on cells dividing very quickly. That means they need a lot of energy, so will have really healthy mitochondria,” said Professor El-Khamisy.

“If we can find a way to selectively damage the mitochondria in the cancer cells, by preventing or slowing its repair mechanism, this could be really promising.”

The findings could also be important for new clinical advances such as the decision by the Human Fertilisation and Embryology Authority (HFEA) to allow ‘mitochondrial donation’ – also known as ‘three-parent babies’ - where mtDNA from a female donor is introduced to an embryo to correct mitochondrial defects.

“This research suggests that clinicians should assess the function of TDP1 and mitochondrial TOP1 before mitochondrial donation takes place, to ensure the success of this procedure,” added Professor El-Khamisy.

Professor Allan Pacey, a fertility expert at the University of Sheffield’s Department of Oncology and Metabolism, said “Given that the first UK licence to perform mitochondrial donation procedures was awarded by the HFEA last month, the publication of this study is very timely.

“It is important that we know as much as possible about how to identify healthy and defective mitochondria, in order to help those people with debilitating mitochondrial disease.”

The research was funded by a Wellcome Trust Investigator Award and a Lister Institute of Preventative Medicine Fellowship and was led by the University of Sheffield in collaboration with the University of Newcastle, the University of Sussex, RAFT, Zewail City of Science and Technology in Egypt, and St Jude Children’s Research Hospital in the US.