The University of Sheffield is delighted to announce that, following the retirement of its current Chancellor Sir Peter Middleton in summer 2015, its new Chancellor will be The Right Honourable Lady Justice Rafferty, DBE – a graduate of the University and a Lord Justice of Appeal since 2011. 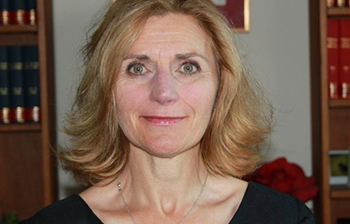 The Chancellor is the senior lay Officer of the University and empowered to confer degrees and other academic awards.

The appointment was approved by the University Council and follows a period in which University students, staff, alumni and friends were invited to nominate individuals who united a strong belief in universities and their transformational importance to society with the professional and personal qualities to serve in this unique ambassadorial role.

Lady Justice Rafferty read Law at the University of Sheffield, graduating with an LLB in 1971, beginning her pupillage in 1974. She was appointed Queen’s Counsel in 1990 and a Recorder of the Crown Court in 1991.

In an outstanding career, Dame Anne has served in a number of senior positions including Chairmanship of the Criminal Bar Association and of the Criminal Procedure Rule Committee – in each case the first woman in these roles. In August this year she became Chairman of the Judicial College. She suggested and wrote the 1989 Pigot Committee recommendation (how the young or vulnerable give evidence in court), acknowledged as a major contribution to the administration of justice and replicated internationally.

"As Lord Justice of Appeal, Dame Anne is one of the UK’s leading judges and a University of Sheffield alumna whose professional achievements and personal qualities make her a perfect fit for a role which combines tradition and a belief in the crucial importance of scholarship with a desire to support the aspiration of students from around the world.

"I would also like to express my sincere thanks and those of the University to Sir Peter Middleton, who has served as a truly distinguished Chancellor for the past fifteen years. We are deeply grateful for his commitment to Sheffield, to our students and for his warm encouragement as an advocate and friend.”

Dame Anne is married to His Honour Judge Brian Barker QC, the Recorder of London (most senior Circuit Judge in the UK and senior judge at the Old Bailey) , and has three daughters – one a graduate of the University of Sheffield.

Sir Peter spent nearly 30 years as an official in the Treasury, working closely with nine chancellors, and was Permanent Secretary from 1983 to 1991. Knighted in 1984, Sir Peter joined Barclays Bank in 1991, serving until 2004 as Deputy Chairman, CEO and Chairman. From 2004 to 2006 he was President of the British Bankers Association. He is currently UK Chairman of Marsh & McLennan Companies.

Lady Justice Rafferty read Law at Sheffield which in 2005 awarded her an LLD, was called by Gray’s Inn and began pupillage in 1974. She became a QC in 1990 and a Recorder in 1991. She is married to His Honour Judge Brian John Barker QC, the Recorder of London, and has three daughters.