Honeybees may unlock the secrets of how the human brain works 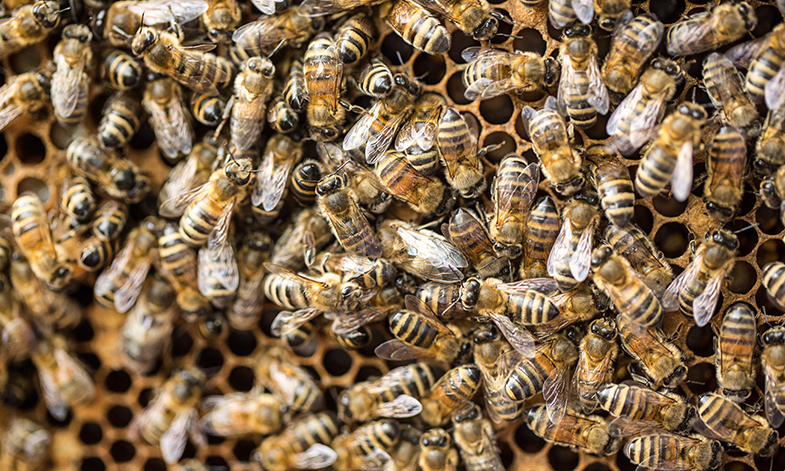 Researchers from the University of Sheffield have discovered that looking at honeybees in a colony in the same way as neurons in a brain could help us better understand the basic mechanisms of human behaviour.

The team studied a theoretical model of how honeybees decide where to build their nest and viewed the bee colony as a single superorganism which displays a coordinated response to external stimuli – similar to the human brain. The study concluded that the way in which bees “speak” with each other and make decisions is comparable to the way the many individual neurons in the human brain interact with each other.

Previous research has shown that the brain of humans and other animals follow certain rules known as psychophysical laws. Single brain neurons do not obey the laws, but the whole brain does. Similarly, this study found that even if single bees do not obey these laws, the superorganism, i.e. the bee colony, does.

The study, published in Nature: Scientific Reports, which has fundamentally found that superorganisms may obey the same laws as the human brain, is important because it suggests that the mechanisms that generate such psychophysical laws are not only happening in brains as previously thought. This discovery will enable scientists to better understand the basic principles that generate such laws by studying superorganisms such as bee colonies, which is much simpler than watching brain neurons in action when a decision is being made.

Pieron’s Law is the law that suggests that the brain is quicker to make decisions when the two options to decide from are of high quality. The brain is slower when the two options are of lower quality. When studying the bee colony, the study found that the honeybee colony is quicker to make a decision between two high-quality nest-sites compared to two low-quality nest-sites.

Dr Andreagiovanni Reina, Research Associate in Collective Robotics in the University of Sheffield’s Department of Computer Science, said: “This study is exciting because it suggests that honeybee colonies adhere to the same laws as the brain when making collective decisions.

“The study also supports the view of bee colonies as being similar to complete organisms or better still, superorganisms, composed of a large number of fully developed and autonomous individuals that interact with each other to bring forth a collective response.

“With this view in mind, parallels between bees in a colony and neurons in a brain can be traced, helping us to understand and identify the general mechanisms underlying psychophysics laws, which may ultimately lead to a better understanding of the human brain. Finding similarities between the behaviour of honeybee colonies and brain neurons is useful because the behaviour of bees selecting a nest is simpler than studying neurons in a brain that makes decisions.”