The University of Sheffield will lead a £7.6m research project to improve the country’s offshore wind power technologies, it was announced today (Thursday 13 July 2017). 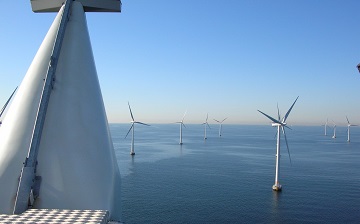 Jo Johnson, Minister for Universities and Science, revealed the news as part of a £138m investment announcement into research partnerships to strengthen links between the UK’s research base, industry and business partners.

The offshore wind project will see the University of Sheffield and collaborating universities Durham and Hull, partnering with Siemens Gamesa Renewable Energy and DONG Energy, the world’s largest offshore wind (OSW) developer, on a five-year programme to address problems that will help to reduce the cost of electricity from offshore wind.

It also aims to lay the foundation for the next generation of wind turbines and farms at a significantly higher level of power generation, helping to meet clean energy challenges.

The partnership of leading OSW companies and research institutions will strengthen the UK’s position as a global leader in OSW research and accelerate the engagement of UK skills and manufacturing in the OSW supply-chain.

By partnering with industry, Sheffield will create the largest joint industry-academic wind power research partnership in the UK, further strengthening its world-leading position in the research of high efficiency and reliable wind power generators and structural health monitoring.

Professor Zi-Qiang Zhu, from the Department of Electronic and Electrical Engineering at the University of Sheffield, who is the lead academic on the programme said: “The project will address the challenges of both the current and future generations of wind turbine (WT) technology in such a way that a chain of critical issues regarding availability and reliability of such structures will be explored and solved.

“The funding will enable fundamental engineering research to be carried out to give the UK the opportunity to establish global leadership in research and in the skills supply-chain, through this unique industry and academic partnership. Being both industry-led and academically-driven, the research will be both genuinely innovative and focussed on delivering business value.”

In December Siemens opened a new £310m offshore wind (OSW) turbine blade factory in Hull, which marked a milestone for the industry and coincided with increased investment in operations and maintenance activities to service the increasing capacity of OSW farms.

Professor Mike Hounslow, Vice-President and Head of the Faculty of Engineering at the University of Sheffield, said: “The UK is positioned to take a leading industrial role in the growing global demand for offshore wind power technologies. The UK’s installed capacity is more than the rest of the world combined and forecast to grow rapidly. However, we need to substantially reduce the electricity costs if we are to achieve the target growth required.

“Two principal technology challenges for OSW cost-reduction are increases in turbine size, and smarter operations and maintenance. These align strongly with the strategic research strengths of the University of Sheffield.”

The project has received £3.8m from the Engineering and Physical Sciences Research Council (EPSRC) and £2.5m from Siemens and DONG, with the rest being made up by the three universities.

The project is part of Prosperity Partnerships announced today by Jo Johnson, which will receive in total £31 million of government funding from EPSRC and the Industrial Strategy Challenge Fund (ISCF) - matched by a further £36 million from partner organisations in cash or in-kind contributions, plus £11 million from universities’ funds, totalling £78 million in all.

The University of Sheffield is one of ten universities to lead on 11 projects.

Siemens and the University of Sheffield

In 2009 Siemens established the S2WP (Sheffield Siemens Wind Power) partnership with the University of Sheffield and has six Siemens engineers at the University. Over the last seven years they have co-created and co-delivered 11 projects, and helped the successful commercialisation of Siemens’ 7 and 8MW direct drive wind power generators.